HomeSportsFIFA World Cup 2022: Fans accuse Germany of hypocrisy as they hold up pictures of Mesut Ozil during Spain clash

FIFA World Cup 2022: Fans accuse Germany of hypocrisy as they hold up pictures of Mesut Ozil during Spain clash

Ahead of the high octane clash between European powerhouses Spain and Germany, all attention was on whether Germany would continue their 'OneLove' armband protest.

Germany cupped their mouths in their opening game against Japan during the team photo, in suppourt of free speech. The loss that followed thereafter led many to slam the Germans, some asking them to concentrate on the football while others lamenting the double standards in the manner they treated former player Mesult Ozil

Fans were seen holding up pictures of Mesut Ozil while covering their mouths with their hands during Germany’s World Cup clash with Spain. 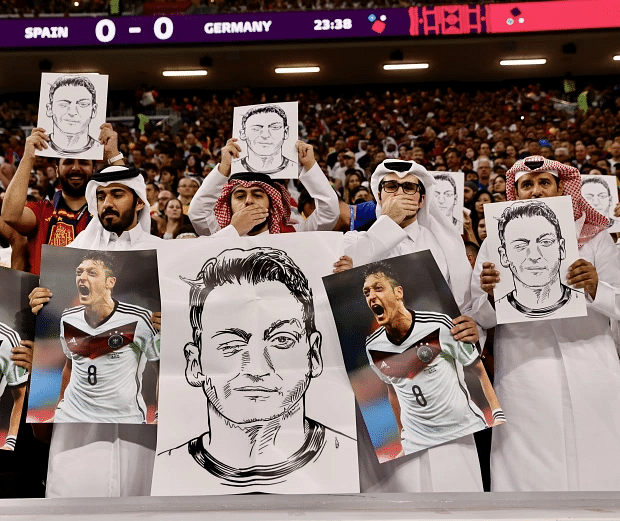 Ozil forced out the door?

Capped 93 times for his country, Ozil released a three-part statement. He detailed his account of the meeting with Erdogan and the criticism that followed.

The former Arsenal star then launched a scathing attack on Grindel before confirming his international retirement.

Fans present against Spain were highlighting the perceived hypocrisy of Germany’s treatment of Ozil, now 34.

PCB threatens not to take part in World Cup 2023 if Asia cup moves out of Pakistan: Sources By Vipul...