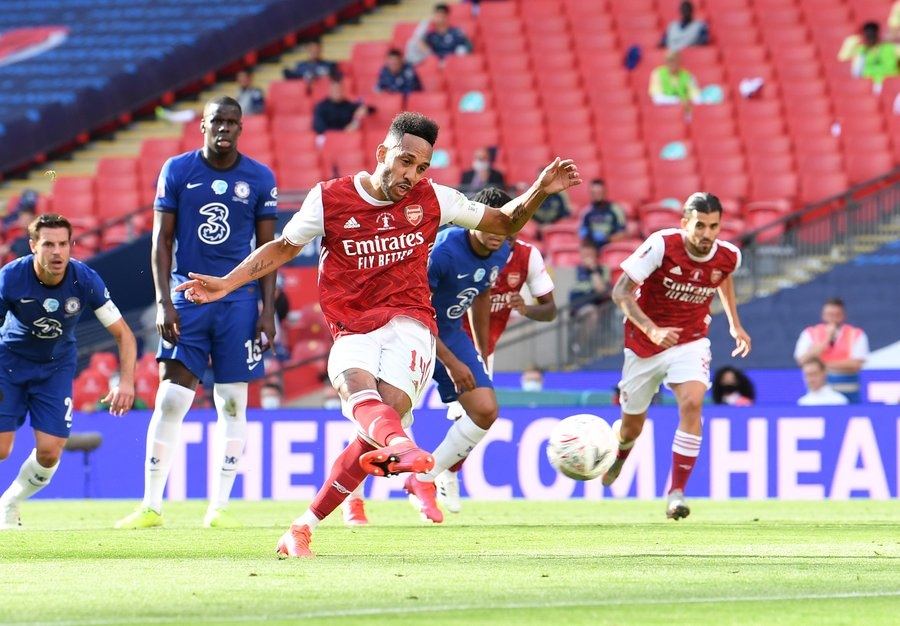 Arsenal extend their FA Cup trophy count to a record 14th time, as the Gunners beat 10-man Chelsea 2-1 in the tournament final on Saturday at the Wembley Stadium.

It was Arsenal's number 14 Pierre-Emerick Aubameyang who was the star performer in the clash as the Gabon striker scripted himself a brace.

Chelsea took an early lead as the American winger Christian Pulisic scored from inside the box just five minutes after kickoff. The Gunners, however, were awarded a penalty owing to a silly tackle from the Blues skipper Cesar Azpilicueta. It was Aubameyang who converted the penalty to equalise just before the half-hour mark.

Later, both Azpilicueta and Pulisic were subbed due to injuries. However, seven minutes after the hour mark, Hector Bellerin's brilliant run past Chelsea's backline helped Aubameyang score his second goal of the day with a brilliant chip over Willy Caballero.

In the 73rd minute, Chelsea were down to 10 men as Mateo Kovacic received a second yellow card for his tackle on Granit Xhaka.

Arsenal, who finished eight in the Premier League, qualified for next season's Europa League with the FA Cup final win. It was also the first managerial trophy for Arsenal manager Mikel Arteta who was appointed the Gunners head coach on 20 December 2019, replacing Unai Emery.

"Everyone's worked so hard since I joined here to try to bring this club back to winning titles so if we can achieve that, I will be delighted," Arsenal manager Mikel Arteta told reporters ahead of the clash.

"But not for myself, for the players and the club that has been through some very difficult moments in the last few seasons. And as well for our fans because they really deserve for us to give them some joy and nice moments," he added.

Meanwhile, Frank Lampard, who won the trophy four times with Chelsea as a player, had a chance to lead the Blues to glory as their manager.

In the Premier League, Lampard led Chelsea to a fourth-place finish, which is the highest finish in the league by a debut manager.

Chelsea will now look forward to their Champions League clash against Bayern Munich. The German champions hold a 3-0 lead from the first leg in March after which the entire football world was brought to a halt due to the coronavirus pandemic.

The Champions League is set to return on Friday, August 7 after a four month hiatus.