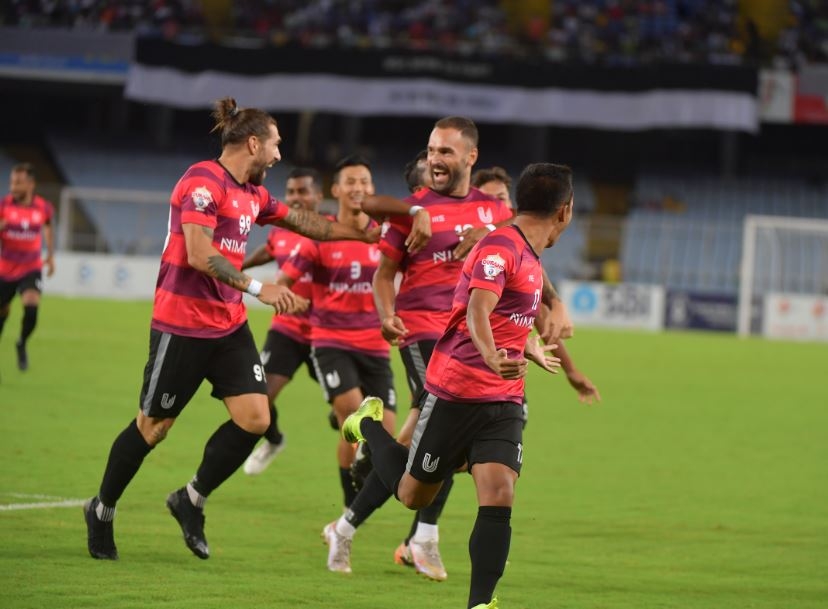 Kolkata: Century-old local favourites Mohammedan Sporting (MDSP), overcame FC Bengaluru United (FCBU) 4-2 in the semi-finals of the 130th Durand Cup on Monday, September 27, 2021, at Kolkata’s Vivekananda Yuba Bharati Krirangan (VYBK), to make their sixth finals of the iconic tournament. Goals from Marcus Joseph, Faisal Ali, Brandon Vanlalremdika and Nikola Stojanovic made sure the Black Panthers quest for a third Durand title remained on course, despite a shock start to the game which saw FCBU talisman Pedro Manzi give his side the lead as early as 22 seconds into the game.

The scoreline, in the end, was a bit flattering for MDSP with United ending the game with 10-men and after tying 2-2 in regulation time. Sporting scored in each half of extra time to get the result, the close to 25000 local fans gathered at the stadium wanted.

MDSP gaffer Andrey Chernyshov went in with his trusted eleven and 4-4-2 formation in front of vociferous local support from the stands. Richard Hood the FCBU coach, started with a similar formation but with a first start of the tournament to Anup Theres Raj at left-back. Sanju Pradhan also started on the bench.

It could not have begun better for United with a move down the right flank involving Yumnam Gopi Singh straight after kick-off finding Manzi in space on top of the box. He was given a second bite of the cherry by the Sporting defence and made no mistake with a booming drive giving keeper Zothanmawia no chance.

The Panthers were stung and responded with ferocity. Milan Singh had the first good shot at goal but it was the inimitable Trinidadian Marcus who was destined to equalize for Sporting.

It was another one from the left of the box cutting across the keeper with his left foot. A trademark now almost. It was his fifth in this edition’s Durand putting him in running for the golden boot of the tournament for the second year running.

The Mohammedan attack line led by Serbian Nikola Stojanovic and ably supported by the likes of Azharuddin Mallik, Sk. Faiaz, Faisal and Marcus were displaying some slick football and stitched together quite a few attractive moves.

From one such move, Marcus found Faisal in the clear inside the box on the left and the youngster came up with a clinical finish, beating Kunzang Bhutia for the second time in the game.

The second-half began as the first had ended with MDSP looking to take most of the initiatives. Quite against the run of play then, Kingshuk Debnath, a local boy, got Bengaluru back in the game, slotting home from a melee off a corner.

The change which made all the difference though was the one made by Chernyshov in the 83rd minute when he had brought on the pacy Brandon Vanlalremdika to replace Sk. Faiaz on the right.

The diminutive winger peppered the 10-man United defence in the second half with Stojanovic providing him ample support and supply.

In one such move in the dying stages of the first 15 minutes of extra-time, the Serbian found him in the clear inside the box. The Mizo had quite a bit to do with two defenders challenging him. He shrugged them off with two deft body feints, first inside then outside and unleashed a grounder with pin-point accuracy to beat Bhutia.

The final goal of the contest was fittingly scored by Stojanovic who blasted a penalty past Bhutia in the 110th minute of the game for a resounding score line for the local team.

Marcus Joseph was adjudged the Man of the Match.