Dortmund close in on Bayern 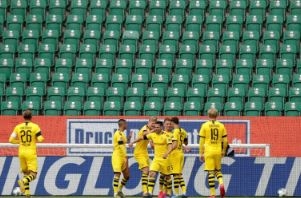 Borussia Dortmund warmed up for their looming top-of-the-table clash against Bayern Munich with a 2-0 win at Wolfsburg on Saturday in the second weekend of the Bundesliga's restart from the coronavirus-enforced suspension.

Goals by Raphael Guerreiro and Achraf Hakimi sealed an away win in front of empty stands to leave them a point behind league leaders Bayern.

On Tuesday, Dortmund host defending champions Bayern, who host Eintracht Frankfurt later on Saturday, in a showdown behind closed doors.

This was the second weekend of the Bundesliga's restart, following a two-month hiatus, as the first top European league to resume during the coronavirus pandemic.

A minute's silence was held before kick-off in the afternoon's four matches to remember the victims of COVID-19, which has so far claimed 8,216 lives in Germany.

In Wolfsburg, Portugal winger Guerreiro, who netted twice in last week's 4-0 derby thrashing of Schalke, scored his third goal in two games to open the scoring in the 32nd minute.

Erling Braut Haaland, who had scored 10 goals in nine league games since joining in January from Red Bull Salzburg, mistimed his attempt to meet the cross, but Guerreiro was on hand to tap home.

With the players calls echoing around the near-empty stadium, Dortmund had a let off early in the second-half when Wolfsburg winger Renato Steffen clipped the crossbar.

England winger Jadon Sancho helped sealed the win when he dribbled at the Wolfsburg defence, then laid a pass off to Hakimi, who fired home 12 minutes from time.

In the final minutes, Wolfsburg had replacement Felix Klaus sent off for fouling Hakimi.

Bayer Leverkusen built on Monday's drubbing of Werder Bremen by moving up to third place with a 3-1 win at Borussia Moenchengladbach, who dropped to fourth.

With the terraces at Borussia Park decked with 13,000 cardboard cut-outs of home fans, Leverkusen's rising star Kai Havertz, who also scored twice in the 4-1 rout of Bremen, again netted twice.

Playing up front as a striker, the 20-year-old Germany winger darted onto Karim Bellarabi's pass into the area and fired home with seven minutes played.

French forward Marcus Thuram levelled with his eighth league goal of the season for Gladbach just after the break.

Havertz netted a penalty soon after when the video assistant referee spotted a foul on Bellarabi in the area, before Sven Bender unwittingly sealed the win with his shoulder nine minutes from time.

Second-from-bottom Werder Bremen gained a valuable win in the relegation fight with a 1-0 win at Freiburg to claim their first victory in eight league games.

Midfielder Leon Bittencourt hit the winner in the 19th minute when his long-range shot flew hit the far corner.

In the action-packed dying stages, Bremen had defender Philipp Bargfrede sent off for a second yellow card and Freiburg had a goal ruled offside.

The result leaves Bremen two points from 16th -- which carries a relegation play-off at the end of the season, but six points from 15th, which guarantees safety.

Bottom side Paderborn are now nine points from safety with seven games left after their 1-1 draw at home to Hoffenheim.

On Friday, Hertha Berlin drubbed neighbours Union Berlin 4-0 at the Olympic Stadium in the capital's derby.

Hertha's new coach Bruno Labbadia celebrated a second win in as many games to lift his team up to 10th.