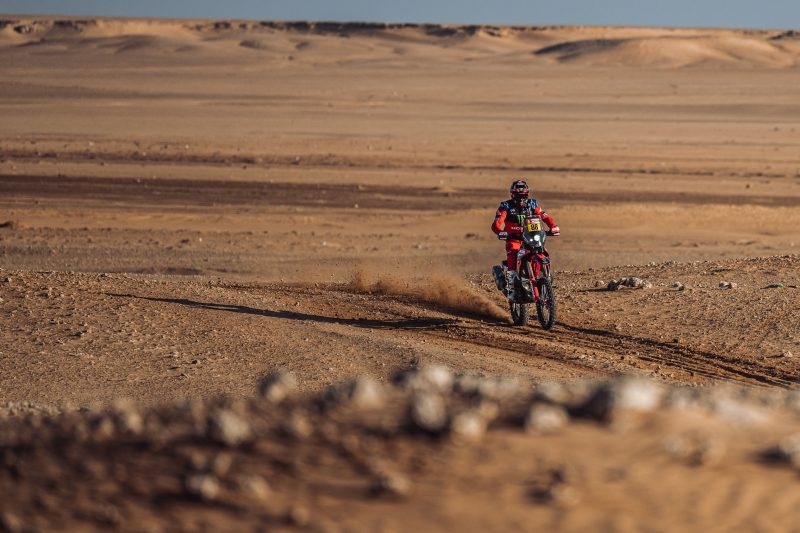 Joan Barreda pushed his Honda CRF450 RALLY to the limit over the 465 Kms to finish with the day's top time at the finish in Riyadh. Chilean rider Pablo Quintanilla put the icing on the cake for Honda Team by clinching the runner-up spot.

79% dirt, 12% dunes, 7% sand and 2% dried-out lake were on the menu for the longest stage of the 2022 Dakar Rally, with a 465-kilometre special and a total trek of 707 Kms. A trial by fire for all those involved. There was a mix of different terrain types to be negotiated and some navigation too. All in all, a high-paced affair that would begin to mark out the riders who will end up in possible contention for the final Dakar prize.

The starting order for this fourth day set the stage for a promising race, particularly for Joan Barreda who came out guns blazing, firmly intent on victory, but also on improving his position in the general standings. With flawless riding and navigational prowess, the Spanish rider reached the finish-line in Riyadh the clear winner and currently holds the seventh position, just over thirteen minutes shy of the overall leader. Tomorrow, Barreda will open the track with his rivals in hot pursuit. Joan was penalized one minute for exceeding the speed limit in a radar zone.

Pablo Quintanilla also performed well. An advantageous starting position also helped him follow the trail of his team-mate. The Chilean turned out a very steady stage, consistently among the top three, climbing up one position in the order in the latter half of the day. Quinta' improves on his position in the table and now lies sixth, eleven minutes and thirteen seconds behind the race leader.

Ricky Brabec, who set off from sixth this morning in Al Qaisumah, had a fairly good day, posting tenth, but Brabec also received a two-minute penalty for speeding in a controlled area. While, Jose Ignacio Cornejo finished 12th, looking more at ease on the bike as the days go by, in spite of a minor navigation mistake earlier in the special.