HomeSportsCopa America: Look at all Argentina vs Brazil finals of the past as Neymar and Messi go head-to-head

Copa America: Look at all Argentina vs Brazil finals of the past as Neymar and Messi go head-to-head

Rio de Janeiro, July 10: Brazil and Argentina will face off for the fifth time in a tournament final when they determine which team will carry the Copa America trophy out of the Maracana Stadium on Saturday. Brazil holds a 3-1 edge in their 84-year history of matches.

Here is how those finals went:

The Copa America format was a round-robin tournament and was supposed to have no final. But in 1937 the two arch-rivals finished level with eight points each, and instead of considering goal difference to pick the winner, Brazil and Argentina agreed to play for the trophy. The match ended 0-0 after 90 minutes at the Gasómetro, the old stadium of San Lorenzo in Buenos Aires. Argentina won its fifth continental title in extra time with two goals by Vicente de la Mata.

2004 COPA AMERICA: Brazil 2, Argentina 2 (Brazil wins on penalties) Argentina's win seemed all but certain as the match at the Estadio Nacional in Lima ticked down. Argentina had opened the scoring with Christian Gonzalez from the spot, saw Luisão equalize in the end of the first half, but a shot by César Delgado three minutes before the end had then defending World Cup champions Brazil nearly knocked out. But striker Adriano scored on the last shot of the match to send the match to penalties. Brazil's goalkeeper Julio César stopped Andrés D'Alessandro and Argentina's Gabriel Heinze missed his chance from the spot. Juan scored the decisive penalty for Brazil, which won Copa America for the seventh time.

Brazil eliminated host Germany in the semifinals while Argentina knocked Mexico out and the archrivals met in a final that many expected to be close. It wasn't. Brazil thrashed Argentina despite Robinho replacing the injured Ronaldo. Adriano scored the first goal with a blast from outside the box in the 12th minute. Kaká found the back of the net from nearly the same position only five minutes later. Ronaldinho, the best player in the world at the time, netted the third in the 48th minute from close range and Adriano finished the rivals off with a header in the 64th minute. Pablo Aimar scored Argentina's only goal.

Argentina was widely expected to win the South American tournament that year. At age 20, Lionel Messi played the final in Maracaibo with Juan Román Riquelme and Carlos Tevez up front, but could not make a difference for the favorites. Brazil scored with Júlio Baptista, an own goal by Roberto Ayala and then Dani Alves. It was the Seleção's second consecutive title in the tournament. It was also Messi's first disappointment with Argentina in tournament finals. 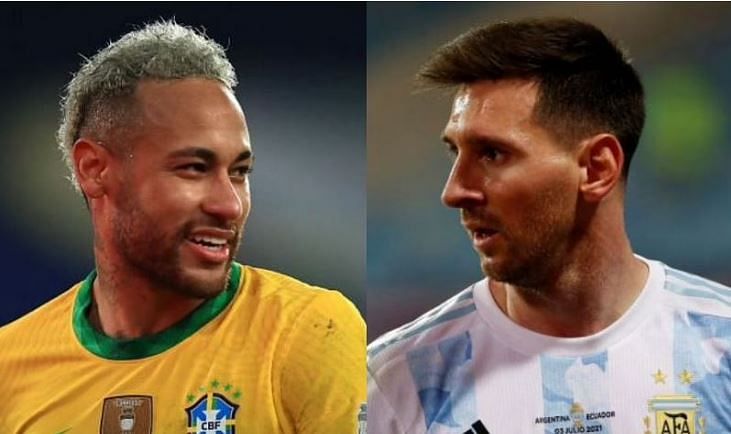