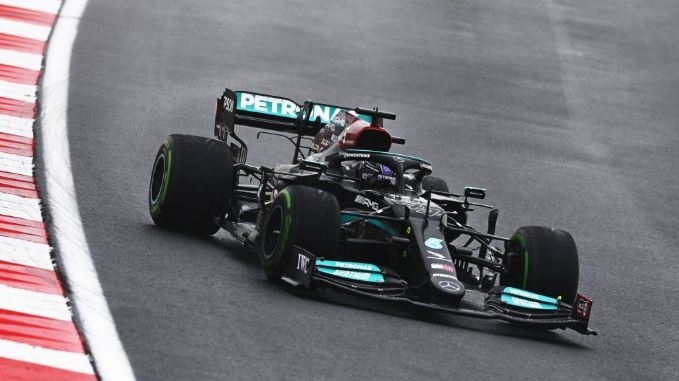 Light rain peppered the track well before the race and while the rain stopped, conditions called for intermediate tyres throughout.

Bottas led the race away from pole, his Mercedes team mate Lewis Hamilton having started 11th thanks to his 10-place engine related penalty, while Verstappen followed the Finn. By Lap 11, Hamilton was up into the top five having passed Pierre Gasly. The defending champion would be promoted to fourth when Sergio Perez pitted on Lap 38.

The pit stops came thick and fast from Lap 35 as Lando Norris was first to choose new inters, Verstappen in next on Lap 37 from P2, and Bottas pitting from the lead one lap later. Charles Leclerc was released into the lead but on Lap 48 of 58 he decided the gamble to forgo a pit stop wasn’t going to pay off and came in for new inters. Bottas delivered his first win since Russia 2020 with a flawless performance from then on, a bonus point given as he also took fastest lap.

Leclerc’s stop put Hamilton into third, the Briton seemingly trying to make it to the end on his starting tyres, or at least make it to dry conditions. The looming clouds said otherwise, and he finally boxed on Lap 51 – his tyres having turned into slicks. He was left furious, asking his team: “Why did we give up that place?!” P5 would be his final spot.

That promoted Leclerc back into the top three but he was passed by Perez on Lap 52, the Red Bull driver taking P3 and his first podium since France. Leclerc finished fourth as Hamilton could not catch the Ferrari driver in the closing laps.

AlphaTauri’s Pierre Gasly took sixth, having shrugged off a five-second penalty for a Lap 1 collision that sent P5 starter Fernando Alonso into a spin. Next on the board was Lando Norris, who was one of the earliest to pit for new inters (on Lap 35) and who settled for seventh having started there.

Carlos Sainz managed a brilliant recovery to P8 as engine penalties saw him start 19th, the Ferrari driver up into the points by Lap 14. His foray up the order was somewhat hurt by an 8.1s pit stop late on, without which he could have been in touching distance of Norris ahead.

Lance Stroll finished P9 having started eighth for Aston Martin, bumped up a place thanks to a pass on Alpine’s P10 finisher Esteban Ocon with five laps remaining. Ocon started 12th but made up two places with Alonso and Yuki Tsunoda dropping out of points contention thanks to respective spins.