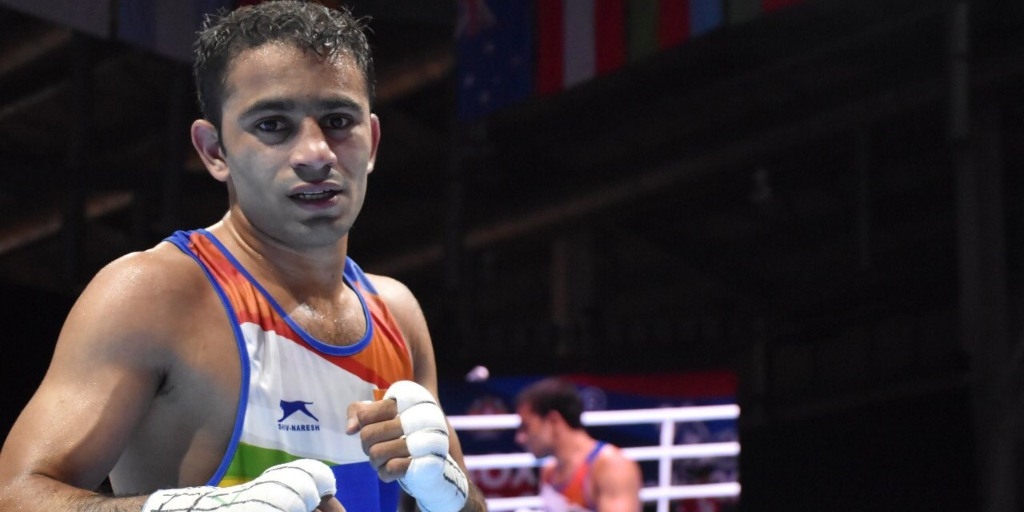 New Delhi: The superb Amit Panghal helped Gujarat Giants wrap up an early entry into the final of the Big Bout Indian Boxing League with a facile 4-1 conquest of Bombay Bullets in the first semifinals at the Indira Gandhi Indoor Stadium Complex here tonight. Yet, Chirag and Scott Forrest were the toast of Gujarat Giants’ conquest on Thursday.

Chirag was under pressure since a lot hinged on the outcome of his 57kg bout with the impressive Kavinder Singh Bisht. British champion Scott Forrest had to overcome memories of a loss to Emmanuel Reyas in the 91kg bout in the league. Both delivered with their ringcraft and never-say-die attitude.

Chirag, the boxer from Jhajjar, and Kavinder Singh Bisht, who hails from Uttarakhand, had not met in the league stage as the Giants had blocked that bout from the draw after winning the toss. They rolled out a wonderful display of their combat skills to the goodly crowd which had turned up to watch the match.

Kavinder Singh Bisht, whose only loss in the league stage came at the hands of Punjab Panthers young Uzbek star Abdulmalik Khalakov, seemed eager to end Chirag’s unbeaten run. And he backed that determination with a solid showing in the opening round, but Chirag showed terrific mental strength in bouncing to make a fine impression on the judges to earn a 4-1 verdict.

Similarly, having conceded some ground in the first two rounds, Scott Forrest picked up extra points with his relentless attack on the tiring Cuban-born Spaniard in the final round to edge out a narrow winner. If there was anything that separated the two heavyweight boxers, it was the Scotsman’s ability to create scoring opportunities for himself while cramping Reyas’s reach.

Skipper and southpaw Amit Panghal, returning to the Giants line-up after two matches, delivered an expected victory over Ananta Chopade. But the 21-year-old Ananta Chopade could leave the ring with his head held high after putting up a gallant fight through the three rounds against a boxer who has an Asian Games gold medal and a World Championship bronze.