Australia get Bangladesh's shock treatment; Bundled out for 62, lowest T20 score as Shakib al Hasan returns with four for nine 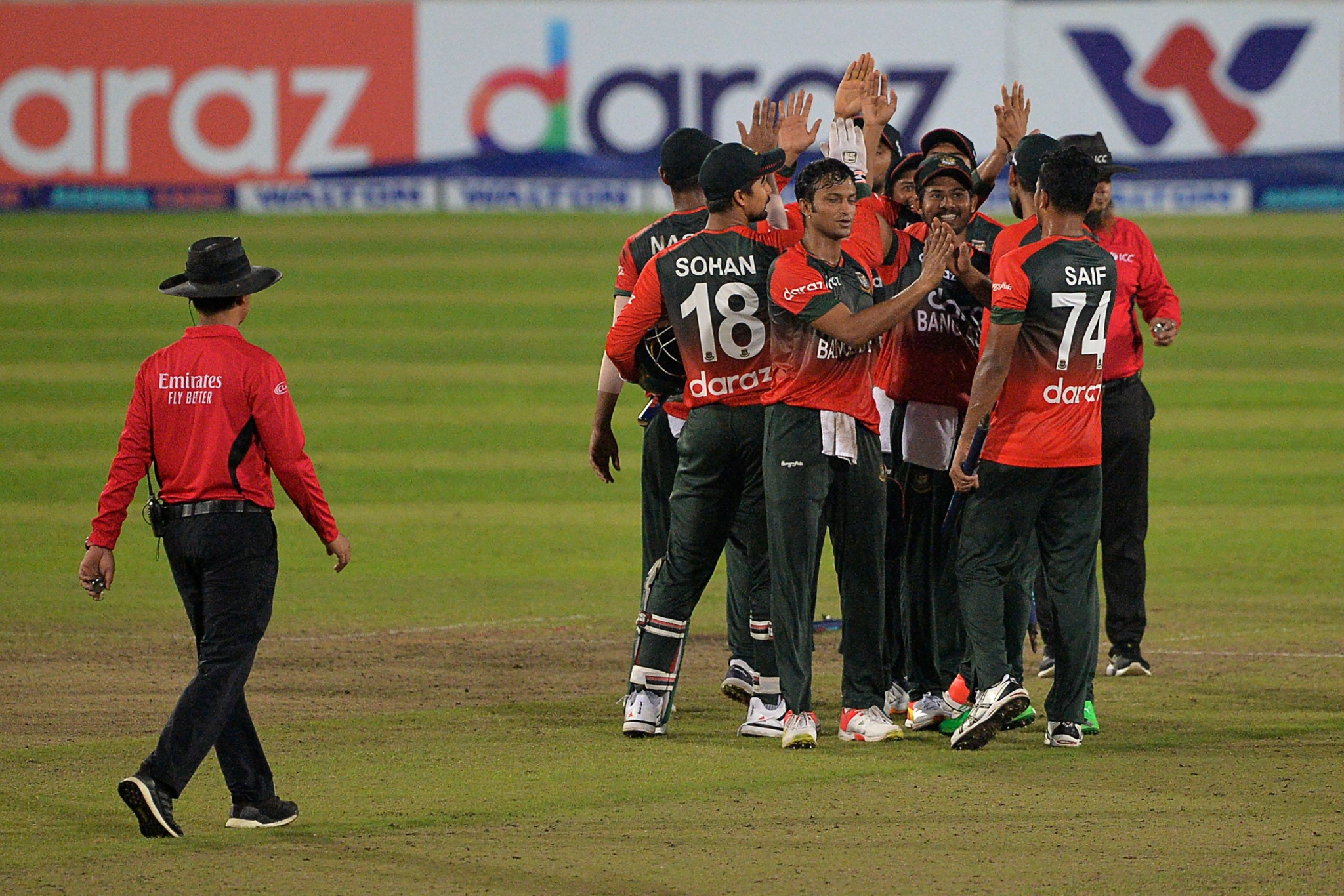 Bangladesh players celebrate after the match |

Dhaka: Left-arm spinner Shakib Al Hasan returned a remarkable figure of 4-9 as Bangladesh held Australia to its lowest Twenty20 cricket score in winning the final game of their series by 60 runs on Monday.

Shakib became the second bowler to take 100 T20 wickets, after Sri Lanka's Lasith Malinga, as Bangladesh defended 112-8 by bowling Australia out for 62 in 13.4 overs.

Pacer Mohammad Saifuddin ended with 3-12 to play a key role in triggering Australia's collapse as Bangladesh won the series 4-1.

"Thanks to my teammates, this achievement wouldn't have been possible without their help," Shakib said.

"Obviously the wicket was tough, but we held our nerve well. All in all a team effort. If you look at the last match, we scored 104-105 and the game still went to the last over. So we knew if we score 120-130 we'll always be in the game."

Shakib then got the better of Ashton Turner for his 100th wicket. In between Saifuddin, one of the two changes by Bangladesh, ripped through the Australian middle order.

Shakib then ensured Australia would fail to reach its previous low of 79 against England at Southampton in 2005.

"There's no excuses of not playing enough cricket. We had enough cricket in the West Indies to come and play good cricket, we just didn't. Credit to Bangladesh, they did well. We really had to scrounge, their batsmen found a way to get there (to 110-120 totals)."

Bangladesh batsmen also were not comfortable in this extremely slow track after their captain Mahmudullah decided to bat first.

Opener Mohammad Naim top-scored for the side with 23 and Mahmudullah made 19.

Mahedi Hasan opened with Naim instead of out-of-form Soumya Sarkar as Bangladesh got a good start.

The pair added 42 runs in 4.3 overs before offspinner Turner removed Mahedi for 13.

Dan Christian had Naim caught by Agar with a slower delivery to further worsen Bangladesh.

Shakib struggled to make 11 off 20 but Afif Hossain showed some intent, launching Christian for a six in the first ball he faced.

However Christian clawed back with the wicket for Soumya Sarkar for 16.

Pacer Nathan Ellis, who claimed a hat trick on his debut, curbed Bangladesh batsmen's aggression in the death overs but Shakib denied the Australians a second victory.