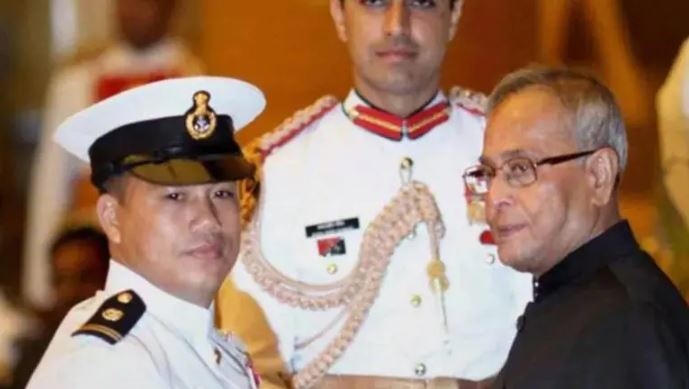 Mumbai: Former India boxer Ngangom Dingko Singh passed away on Thursday after prolonged illness. A Padma Shree awardee, who ended India’s wait of 16 years for Asian Games gold in bantamweight category at 1998 Games in Bangkok, lost his fight to liver cancer, which he was battling since 2017. He was 42.

He must have not done much to himself with regards for winning medals overseas, but has been an inspiration to the GenNext of Indian pugilists with his ring craft and flamboyant personality. Dinko Singh, the bantamweight boxer, the Asian Games gold in the 1998 edition in Bangkok, lost his battle against liver cancer passed away in Imphal hospital on Thursday. Dingko was battling ill-health for a number of years now, starting with liver cancer, for which he was being treated since 2017.

He was 42 and had been fighting the disease since 2017. He is survived by his wife Babai Ngangom, a son and a daughter.

During his battle with cancer, the former bantamweight (54kg) boxer's health woes were compounded by a bout of jaundice and COVID-19 last year.

"Yes, I will win the medal at the Olympics," Dingko had told his correspondent when he returned to Pune after winning the medal, were he was based.

Dingko's gold in the Bangkok Asiad was the first in 16 years for Indian boxing after Kaur Singh's top finish at the regional showpiece's 1982 edition.

Shri Dingko Singh was a sporting superstar, an outstanding boxer who earned several laurels and also contributed to furthering the popularity of boxing. Saddened by his passing away. Condolences to his family and admirers. Om Shanti tweeted Prime Minister Narendra ModiSports Minister Kiren Rijiju also offered condolences on his demise along with several Indian boxers, some of whom have only heard tales of his dazzling persona.

New Delhi: He exploded on the scene like a seasoned superstar. Not many fit this description in Indian sports, especially without an Olympic medal, but then Dingko Singh was unlike most.

All of 42 and four years after losing over 70 per cent of his liver to cancer, Dingko breathed his last at his Imphal home on Thursday, leaving Indian boxing stunned and the many he inspired with a deep sense of void in their lives.

His single biggest sporting achievement was an Asian Games gold in the 1998 Bangkok edition, which was India's first in 16 years. But bigger than that was the impact he had on those who watched him out-punch two Olympic medallists that year.

That was the Dingko effect on a generation of accomplished north-eastern boxing stars, including M Sunranjoy Singh, L Devendro Singh and L Sarita Devi among several others.

He was in the capital to watch the Commonwealth Games at that time and was enjoying his anonymity in the spectators' gallery.

He couldn't be faulted for being blissfully unaware of his impact. He never really got the time to assess it.

Dingko was born to a poor family in Imphal's Sekta village and meagre resources forced his parents to leave him at a local orphanage.

It was there that scouts from the Special Area Games Scheme (SAG) started by the Sports Authority of India (SAI) first noticed the raw boxing talent in him.

Talented he definitely was, add to that mix a famously mercurial personality and it all added up to make a fearless campaigner in the ring and a daunting man to manage outside it.

Indian boxing got the first glimpse of Dingko's talent at the 1989 sub-junior nationals in Ambala where he became a champion as a 10-year-old.

From there began the journey of his development into a world-class bantamweight pugilist, the one who seemed ready to explode at the biggest stages, against the toughest opponents.

Dingko was said to be drunk during that pre-Asiad meltdown and alcohol proved to be his undoing after the Games as well, ultimately causing the many health issues that he battled.

Early exits from the 2000 Olympics and the 2002 Commonwealth Games left Dingko's career at crossroads.

It wasn't too long before he hung up his gloves and took to coaching at Imphal's Sports Authority of India centre.

He was suspended from that job in 2014 after allegedly beating up a female weightlifter at the facility for merely professing her affection towards him.

There were countless other tales as well of Dingko losing his cool while being at the peak of his prowess.

However, every fight comes at a price. His treatment took a toll on his limited resources and there came a time when he had to appeal for help, which did come his way from several quarters.

His misery compounded with jaundice and COVID-19 in June last year, which needed one month of hospitalisation and he was overcome by a sense of relief on returning home, calling it the toughest one month in a long, long time.

The man himself seemed unaware of the magnitude of his health challenges as well.