Marnus Labuschagne and Steven Smith posted hundreds to help Australia to 298 for five at stumps on day one of the second Test against Sri Lanka on Friday.

Darren Lehmann in 2004 had been the last Australian batsman to score a hundred at the spinner-friendly turning tracks in Galle International Stadium.

The pair added 134 runs for the third wicket in 223 deliveries as Australia consolidated its position. The stand was eventually broken when Dickwella completed a stump with Laubschagne on 104 to give left-arm spinner Prabath Jayasuriya his maiden Test wicket. He faced 125 deliveries and hit 12 fours.

Australia, which won the toss, lost two quick wickets after Labuschagne's dismissal as Jayasuriya made an impact. The left-arm spinner's first 12 overs had cost 54 runs and fetched no wickets but his next 10 overs produced three wickets for 22 runs as Sri Lanka staged a comeback.

Travis Head was bowled for 12 while Cameron Green, who escaped a stumping chance on one, was trapped leg before wicket for four.

Smith was untroubled, though. The former captain had been run out in his only innings in the first test and he was determined to make amends.

Although the pitch offered extra bounce and turn for the spinners, Smith was solid with his defense. He reached his century with a spectacular cover drive off Kasun Rajitha and was unbeaten on 109 at stumps having hit 14 boundaries. He faced 212 balls and had batted for four and half hours.

Sri Lanka was forced to make four changes to the team that lost the first Test by 10 wickets after four players tested positive for COVID-19 ahead of the game. Dhananjaya de Silva, Jeffrey Vandersay, Asitha Fernando and Praveen Jayawickrama were all isolated after they tested positive.

The hosts handed Test debuts to Kamindu Mendis, Maheesh Theekshana and Jayasuriya while Kasun Rajitha returned to the side after missing the first test. Australia went with an unchanged side.

Theekshana, who troubled the Australians during the limited-overs series, failed to pick up a wicket but he kept one end tight, something that Sri Lanka lacked in the first Test. His 15 overs cost just 45 runs.

Australia has retained the Warne-Murali Trophy having won the first test and a win in the second will help consolidate their position as World's No.1 ranked team.

Since Lehmann's century in 2004, Australia had played three tests here and despite winning two of those none of their batsmen had scored a century - until Friday. 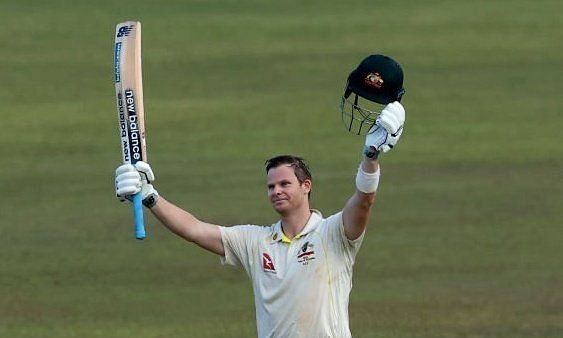