There are different types of transformers which are being used in the electrical system.

In the field of electrical engineering, a power system is made up of several pieces of equipment and one of them is a transformer which is the most crucial part of the whole system, the same as a heart in the human body. The main objective of a transformer is to change the voltage levels as per requirements using the electromagnetic induction. A step-up transformer is widely used in the power transmission system to transmit electricity to a longer distance with maximum efficiency, whereas, a step-down transformer mainly used in the distribution system to cater the consumer’s requirements. 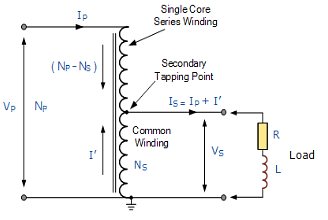 Working Principle of an Autotransformer:

The construction of an autotransformer is consist of a single winding (Figure 1) that works similar to conventional transformer based on Faraday’s 1st law of electromagnetic induction, which describes as “whenever a conductor is placed in a varying magnetic field, an electromotive force (EMF) is induced. If the conductor circuit is closed, a current is induced which is called induced current”. Now, when alternating current is applied to the primary winding of the autotransformer, then an EMF is induced in the primary part according to above said law (Popovic, 2006). 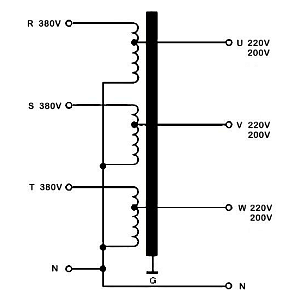 This is the general approach for the step down case which is described and it is noted that single phase and 3 phase autotransformers are more suitable for step down applications. However, by interchanging the position of source and load, the step up scenario can easily be analysed. For this purpose, the directions of primary and secondary currents are reversed. It is important that to maintain MMF balance, the current direction in series winding is linked with change of current direction in common winding (Prasad, 2019).

Applications of a 3 phase Autotransformer:

Furthermore, this autotransformer plays a salient role in starting of an induction motor and synchronous motors, because these motors take higher current at starting due to which the voltage drops. Thus, a 3 phase autotransformer enhances the voltage when the motor is switched on. Also, they supply required voltage to the furnaces to operate.

Every kind of transformer has its own positives and negatives. So it is necessary to be aware of these for a better selection. Here are some advantages and disadvantages of 3 phase autotransformer;

More efficient due to low copper losses even if the rating increases.

Greater voltage regulation because of the less leakage flux.

Not secure to be used for stepping down high voltage for a smaller load due to the absence of isolation between primary and secondary windings. Thus, only convenient for adequately smaller voltage conversion.

The 3 phase autotransformer mostly works as a source of ground fault currents as it is not very effective in conquering harmonic currents.

The above study concludes that 3 phase autotransformer is a suitable choice due to low copper losses, high efficiency and greater voltage regulation. Although the principle function of different types of transformer is the same, this specific type is more advantageous and cheaper due to its compact design and simple construction. However, it is necessary to get significant knowledge about the application and pros and cons of 3 phase autotransformer to get maximum satisfactory results.

This article is generated and published by FPJ focus team. You can get in touch with them on fpjfocus@fpj.co.in