You have to be silly to buy chilli 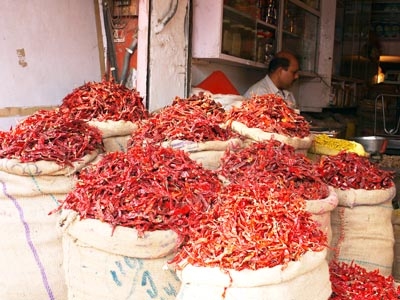 Navi Mumbai :  Though incessant rains since July 27 have given a respite to residents of Navi Mumbai, the rising vegetable prices have given them sleepless nights. Prices of all essential vegetables are going beyond consumers’ buying capacity.

First it was scanty rains which had drastically curtailed supplies of tomatoes, cauliflower, green peas, capsicum, cabbage, brinjal, lady’s finger, beans and of course potatoes and onions. It was expected that prices would stabilise with the arrival of monsoon. The state received heavy downpour in the last week of July, but vegetable prices are yet to stabilise and hence consumers have been forced to lower their daily intake.

Officials at the APMC (Agriculture Produce Market Committee) Vashi blame the shortfall in supply to shortage in production. However, onion prices have stabilised to some extent. Due to scanty rains, onion production suffered a lot in June and first fortnight of July and it was reflected in wholesale as well as retail outlets. Prices, which have hit the roof and went to the Rs 60/kg club during the period, have given some respite to consumers. On Saturday, onion was available at Rs 30/kg in Vashi, thanks to improvement in supply from Nashik. Potato too has stabilised at Rs 30 a kg on better supply.

Tomatoes, on the other hand, are yet to show any reduction in prices and ruling between Rs 80 and Rs 100 a kg. On Friday, only 35 truck-loads of tomatoes were recorded at the Vashi APMC as against 60-70 trucks. The drastic fall in supply has pushed up prices, said a wholesale trader. On questions of hoarding, he said tomato is perishable and it is quiet impossible to hoard the same.

Green chilli has also turned red and touched a new high on Saturday, when it was offering at Rs 150 a kg. Marketmen blamed incessant rains which damaged the stock. The lower-than-expected arrivals have pushed up prices. As wet chillies are considered damaged, crops that have dwindled supplies have pushed up both wholesale and retail prices. The Vashi wholesale market used to get 30 trucks on normal days, it has seen only 14 trucks on Friday.

Other vegetables such as cauliflower, brinjal, capsicum, lady’s finger, French beans had become elusive and belonged Rs 80 a kg club as supplies from Maharashtra, Madhya Pradesh and Madhya Pradesh were disturbed due to incessant rains. Green peas, on the other hand, after stabilizing at Rs 80 a kg has jumped to Rs 120 a kg. Ginger too has declined to give relief to consumers as prices jumped to Rs 200 a kg from Rs 150 a week ago.

A steep rise in prices affect the monthly budget. Uma Poddar, a homemaker, who stays in Vashi said: It has become difficult to sustain as the rising prices affect spending capacity, especially salary group people like her. Like Uma, many others have now cut down on vegetable consumption. Wholesale traders, however, optimistic. They said prices are likely to ease by middle of August as supplies will pick up.