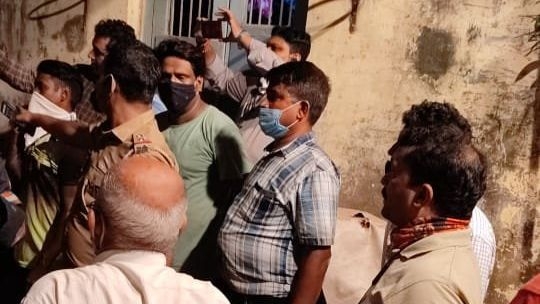 A four-storeyed building collapsed in the Kalbadevi area of south Mumbai on Sunday. A 61-year-old man died during the mishap as over 100 residents from close premises were rescued, said the Mumbai Fire Brigade (MFB) department.

Senior BMC officials said that the building, Raj Bhavan, is owned by the MHADA. The officials added the deceased identified as Sundara Saw was rushed to JJ Hospital after a concrete slab fell on him when he was passing by the building.

A portion of a common toilet on the fourth floor had collapsed around 5.30 pm on Sunday, while slabs from the remaining floors of the building kept hanging, said Hemant Parab, Chief Fire Officer, Mumbai Fire Brigade.

He said that his team evacuated more than 100 residents from Raj Bhavan and nearby residential buildings to prevent further loss of lives and damage.

"We received a call of a building collapse around 5.30 pm. After our officials reached the spot we found that the building was in a dilapidated state and could collapse at any moment," Parab told FPJ on Monday.

Parab said that after evacuating the residents the entire building was pulled down.

Akash Purohit, a local BJP corporator said that the building was a commercial property and had been in a dilapidated stage for many years.