Uddhav to meet farmers in Beed when PM visits city 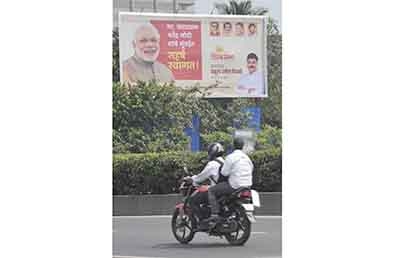 The hoarding feliciting the PM that Sena MLA Rahul Shewale had put up. |

Mumbai  : In yet another flashpoint in the uneasy relation between allies Bharatiya Janata Party (BJP) and the Shiv Sena in Maharashtra, Sena chief Uddhav Thackeray has not received an invite for the Ambedkar memorial bhoomipujan on Sunday. To avoid embarrassment, Uddhav has instead decided to go to Beed to meet farmers. On the other hand, Rahul Shewale, a Shiv Sena MP, has erecting a huge hoarding in Mumbai welcoming Prime Minister Narendra Modi.

According to sources, it is learnt that Uddhav has not received an invite for the Ambedkar memorial bhoomipujan on Sunday. Sources say Uddhav has decided to go to Beed instead to meet farmers.

Senior BJP leaders Venkaiah Naidu, Nitin Gadkari, Santosh Gangwar, Thavar Chand Gehlot and other Maharashtra ministers are expected to attend the function. PM Modi is likely to address a rally at Bandra Kurla Complex, which is near the Thackeray residence, Matoshree’.

Uddhav is trying to keep himself away from the city since, then, no one can question why he is not attending the rally. But the hoarding erected by Shewale might raise questions in the minds of Mumbaikars.

Shewale said that his party has not issued any guidelines about PM Modi’s visit to Mumbai. “The function is happening in my constituency. I am an MP. So, as per protocol, I have an invitation from the central government. My efforts are also there for the memorial, so I have to attend it,” he said.

This is the second time that Uddhav has chosen to skip a function attended by Modi. In March last year, at a function meant for the inauguration of Sir H.N. Reliance Foundation Hospital, he skipped the function, even though he had an invitation for the function. He had decided to stay away from it due to the tension in the alliance between the BJP and the Sena over the issue of portfolios allotted to the Shiv Sena.