HomeMumbaiThane: Animal lovers at Lodha Amara are safeguarding dogs and residents; here's how

Thane: Animal lovers at Lodha Amara are safeguarding dogs and residents; here's how

Residents who are also animal lovers have clubbed together and have been getting dogs vaccinated, and sterilised since many residents have been complaining about the threat posed by stray dogs in the area.

Stray dogs playing with each other | Representative Image
Follow us on

While some residents of the Lodha Amara complex in Thane have been complaining about the threat posed by stray dogs in the area and the Thane Municipal Corporation’s failure to act, others have been working to sort out the problem while safeguarding the interests of the animals and humans.

Manik Rege, who also resides in Lodha Amara, says he has been working with other like minded citizens to resolve the matter and in the past two months alone, 16 dogs from the complex have been taken for sterilisation to the TMC compound near Ashar IT Park.

Those that could not be attended there were taken to the nearby animal hospital run by the Community for the Protection and Care of Animals (CPCA), STAN Foundation, and even private vets. Citizens also conducted a drive to vaccinate more than 30 dogs in the complex against rabies and nine other canine diseases, Rege said. The same number has been sterilised over the past year. Many of these activities were done by residents at their own cost, Rege said, estimating that the total spend was about Rs 65,000 for transport, surgery and postoperative care and vaccination.

The group has also filed an official request for dedicated feeding spots around the premises to reduce chances of conflict with humans and ensure that feeding is done safely and responsibly.

An anima behaviourist has also been roped in to reduce instances of reactions or conflicts. A dog will usually not attack unless threatened, cornered or provoked in some manner, intentionally or otherwise. 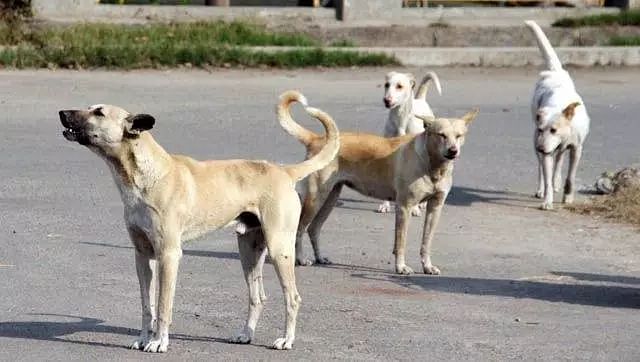 A joint meeting was held recently between representatives of the clusters inside the Lodha Amara complex and citizens working for the welfare of humans and animals. This was attended by CPCA representatives as well.

The complainers, however, insist that the canine population is increasing and the TMC veterinary department is not sterilising dogs regularly. Sneha Singh, a social activist from Majiwada, said, “Society is not against dogs. We just want their population to be brought under control.”

According to Singh,this issue is not limited to the Lodha Amara enclave but is visible all over Thane. “These dogs charge at and pounce upon women and children. Residents have complained to the TMC and local corporators several times but to no avail.”

Sachin Shingare, a local BJP leader, said, “A few days back, I got a letter from Wing 33 of Lodha Amara in Kolshet regarding the issue. I gave it to MLA Sanjay Kelkar who wrote to the TMC to resolve the issue. However, the TMC is doing nothing.” Shingare claimed that the video clip of the Amara incident that had gone viral was just a glimpse of what is now “normal” in Thane.

Majiwada resident Mohit Sharma said, “We first went to local corporator Sanjay Bhoirbut got onlyaverbal assurance. After that, we connected with Shingare but it seems the TMC doesn't heed MLAs either.”

Nia Singh, a model who resides in Lodha Amara, said a dog barked at and followed her to the gate of the complex when she went out at night recently. “We feel unsafe, especially at night,” she said.