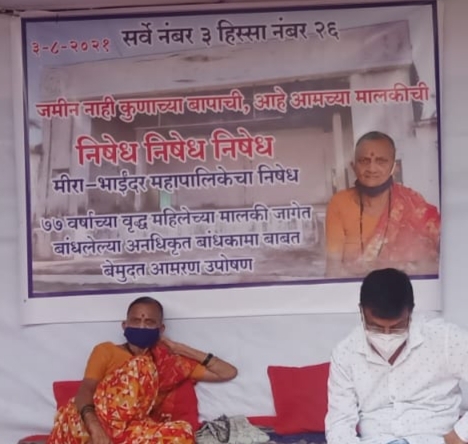 A 77-year-old woman went on an indefinite hunger strike to protest against the Mira-Bhayandar municipal corporation (MBMC)’s lax attitude towards the demolition of a stage that was illegally constructed on her ancestral property in Morva village in 2004. The senior citizen, Jayshree Prabhakar Mhatre, and her family have been running from pillar to post for several years to get justice.

According to sources, an influential contractor, attached to the MBMC, is said to be involved in the scam. Based on the complaint filed by Mhatre, the Bhayandar police have booked the contractor and his son for cheating and forging documents. However, neither has the police arrested the duo, nor has the civic body demolished the structure. So, the senior citizen decided to stage a hunger strike.