Not even a bit of disgruntlement in MVA: Sharad Pawar 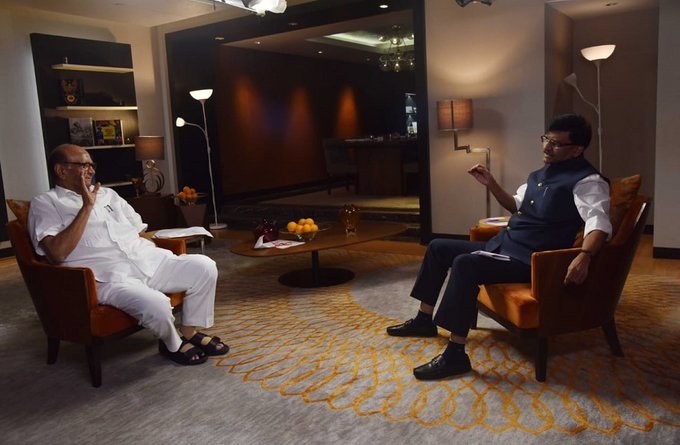 In what was billed as a ‘historic’ interview by the Shiv Sena mouthpiece Saamna, Nationalist Congress Party (NCP) president Sharad Pawar indicated that the Uddhav Thackeray-led Maha Vikas Aghadi (MVA) government in Maharashtra was stable.

Pawar also denied the claims of former Chief Minister Devendra Fadnavis that the NCP was in talks with the Bharatiya Janata Party (BJP) to form a government.

The interview with Saamna executive editor and Rajya Sabha Member of the Parliament (MP) Sanjay Raut was carried in the newspaper on Saturday. This is the first time that a non-Thackeray has been interviewed by Saamna in a three-part interview.

Pawar said there was ‘not even a bit of disgruntlement’ in the three parties that formed the MVA, namely the Shiv Sena, NCP and Congress, and they were with Uddhav in the fight against COVID-19.

“… no politician or leader should ever take the people for granted. This creates a sentiment in the people that such behaviour smacks of arrogance and they make up their minds to teach them (such politicians) a lesson,” charged Pawar, while speaking about Fadnavis. He added that former Premiers Indira Gandhi and Atal Bihari Vajpayee had also been trounced in elections.

Pawar denied that he was either the ‘headmaster’ or the ‘remote control’ of the MVA regime. “A headmaster should be in a school. In a democracy, a remote cannot be used to run the government or administration. A remote will work only in authoritarian regimes,” he explained.

Pawar also refuted any differences with the CM over the lockdown. It was reported that Pawar was eager to get the lockdown relaxed gradually to allow resumption of normal life.

“Look at the period before Uddhav Thackeray became the chief minister. In those five years, the Shiv Sena and Bharatiya Janata Party (BJP) were in power, but there was a sort of unease in the Shiv Sena’s voters and cadre about the government,” said Pawar. He added that the Shiv Sena had paid a price for this power-sharing with the BJP as the latter repeatedly tried to corner it.

Pawar said the style of functioning of the BJP was not in consonance with that of Shiv Sena supremo late Bal Thackeray.