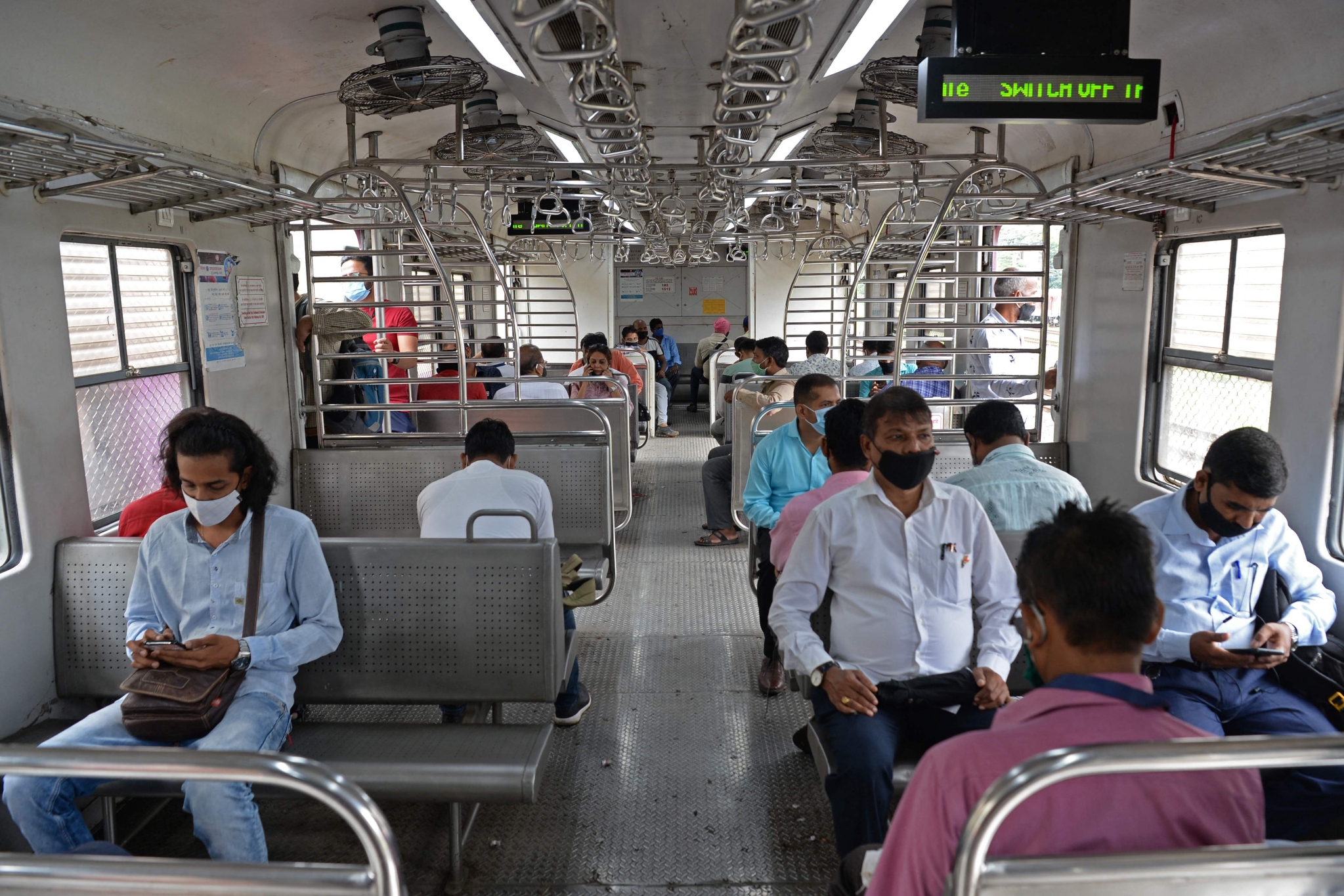 Passengers travel in a suburban train after the government allowed fully vaccinated people against the Covid-19 coronavirus of all ages to travel in local trains in Mumbai on August 15, 2021. | (Photo by Indranil MUKHERJEE / AFP)

Mumbai, August 16: A petition has been filed in the Bombay High Court seeking quashing of the recent Maharashtra government Standard Operation Procedure (SOP) and notification regarding permission for train travel by fully vaccinated persons. The petition says the move that is violates fundamental rights of people.

The government has permitted those persons to travel by local train who are fully vaccinated and 14 days has passed since their second jab.

Social worker Firoz Mithiborwala has filed a petition through advocate Abhishek Mishra stating that the Sop dated August 10 and the notification dated August 11 are violative of fundamental rights of citizens under Article 14 (Equality before law), Article 19 (Protection of certain rights regarding freedom of speech, etc) and Article 21 (Protection of life and personal liberty) and hence should be quashed.

Mithiborwala has said that in reply to an RTI application by one Tarun in April, the government had said that “vaccination was voluntary and not mandatory”. Tarun had further asked “could the government or private organisation hold back salary or terminate anyone from jobs in case an employee doesn’t get vaccinated?” Besides, he had also asked whether “government could cancel any kind of government facilities such as subsidies, ration and medical facilities for not taking the vaccine?” To this, the government replied: “In view of above reply, these queries do not arise.” Meaning, since the vaccination is voluntary, no one can force anyone for taking the jab and no one can be discriminated against for not taking the jab.

The petition points out that since getting vaccinated was purely individual decision, direct or indirect method to coerce citizen to get vaccinated was illegal and violative of fundamental rights.

Mithiborwala has also stated that in 2017, Delhi High Court and Kerala High Court had ruled against forcibly vaccinating children with MR vaccine which was made mandatory by the Union government then.

Last month, with regard to Covid-19 vaccine, the Gauhati High Court and Manipur High Court had ruled against discrimination of unvaccinated people from earning livelihood.

Besides, it is settled legal position that a person has fundamental right to choose medication as per his choice, reads the petition.

The petition prays for quashing the SOP and the notification to the extent to which it discriminated with people on account of their not being vaccinate. This will amount to violation of Article 14, 18 and 21.

It further prays that till final hearing in the petition, the HC direct the concerned authorities to permit everyone to travel by local trains without any discrimination on account of vaccination.