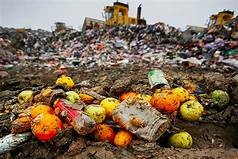 At a time when organisations across the globe, including the United Nations, are sharing tips to reduce food waste, nearly three-fourth of the waste generated by inhabitants of the maximum city in the past year comprised food, according to the environment status report (ESR) released by the BMC for 2020-21. Of this, 5,000 metric tonnes (MT), which is almost 73%, of garbage generated in Mumbai is organic.

The BMC’s annual ESR report reveals that in 2020-21, food waste accounted for 72.6 per cent of the total garbage that makes its way into the city’s dumping grounds. What makes this a hazard? Despite the BMC’s diktat to segregate wet waste at the source, a major chunk of this organic waste is choking the dumping grounds that have been witnessing recurring fires in the last few years.

Over the years, the BMC claims to have reduced garbage generated per day from 9,400 MT in 2017-2018 to 5,500 MT until March 2021. However, the amount of food waste generated in the financial capital remains the same, raising concerns amongst environmentalists.

The impact this has on the environment has become a concern. “It burdens waste management systems, exacerbates food insecurity, making it a major contributor to the three planetary crisis of climate change, nature and biodiversity loss, and pollution and waste,” Executive Director of the United Nations Environment Programme, Inger Andersen, said in the UNEP’s Food Waste Index Report, 2021.

According to the BMC, the average waste generated per person per day is 450 to 650 gm. Waste management experts claim if Mumbai recycles its waste, it could reduce the amount of garbage transported to its overburdened landfills by 93 per cent.

The BMC’s Environment Status Report 2020-21 shows sand, stone and fine earth (construction debris) accounted for 17.37 per cent of the city’s waste, while the remaining comprised of plastic (3.24 per cent), organic dry waste such as wood and cloth (3.51 per cent) and paper and other recyclables, including metals (3.28 per cent).

Civic officials said the figures were collated on the basis of a study conducted by the National Environmental Engineering Research Institute (NEERI). The data was consolidated by the civic Solid Waste Management (SWM) department.

“The concept of disciplined disposal of waste is still missing in Mumbai. Many housing societies are not segregating dry and wet waste. Segregation of waste should be in seven categories – dry, wet, electronic, biomedical, glass, plastic and thermocol. This should be collected by separate contractors for effective disposal or recycling. However, we are asking citizens to be responsible and segregate waste and treat wet waste generated at the source within their premises. Since 2020, the scenario has been worse due to the pandemic. A total of 3,367 housing societies and other establishments have been identified as bulk waste generators in the city. Of these, 1,698 have started segregating and composting waste in their premises. The rest have not been following the rule,” said a senior BMC official.