According to the Vakola police, the raid was conducted after receiving a tipoff against a dance bar in the suburban Kalina area

Mumbai: A total of 32 people have been arrested following a raid on a dance bar, the police stated, adding that four women were also rescued during the action.

Those apprehended, including 21 patrons and 11 bar employees, were booked under relevant sections of the Indian Penal Code, including Section 294 (obscenity).

According to the Vakola police, the raid was conducted after receiving a tipoff against a dance bar in the suburban Kalina area.

Acting on the input, a joint team of cops and social service branch officials swooped down on the Pushpak Bar late on Wednesday night.

Briefing about the action, Vakola police station senior inspector Pradip Madhukarrao said, "During the raid, eight bar girls were found on the premises, while the owner has permission to employ only four."

The process of cancelling the bar's license for violations is going on. After all the documents get verified, the report will be sent and the license of the bar will be revoked, the official said. 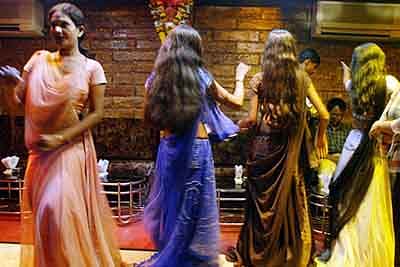