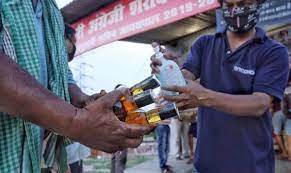 Despite a series of actions by the police and excise officials, bootleggers and the liquor mafia continue to have a free run in the twin-city. A night patrolling team led by Assistant Police Inspector-Prashant Gangurde arrested a bootlegger who was caught selling Indian Made Foreign Liquor (IMFL) and country liquor (CL) to tipplers near the Jari-Mari pond in Kashigaon village area of Kashimira on Sunday night.

Notably, the accused who has been identified as- Ashok Baburao Aangde (50), had turned his Sports Utility Vehicle (SUV)- Maruti Breeza into a mobile liquor vending store.

The accused was taken into custody and booked under section 65 ( e ) of the Bombay Prohibition Act, 1949.

While the SUV has been impounded, the police are conducting investigations to ascertain if the liquor was brought from some local stores or was smuggled from outside the state.

According to present guidelines issued by the state government authorities, bars and wine shops have been allowed to operate till 10 pm from August 16, 2021.