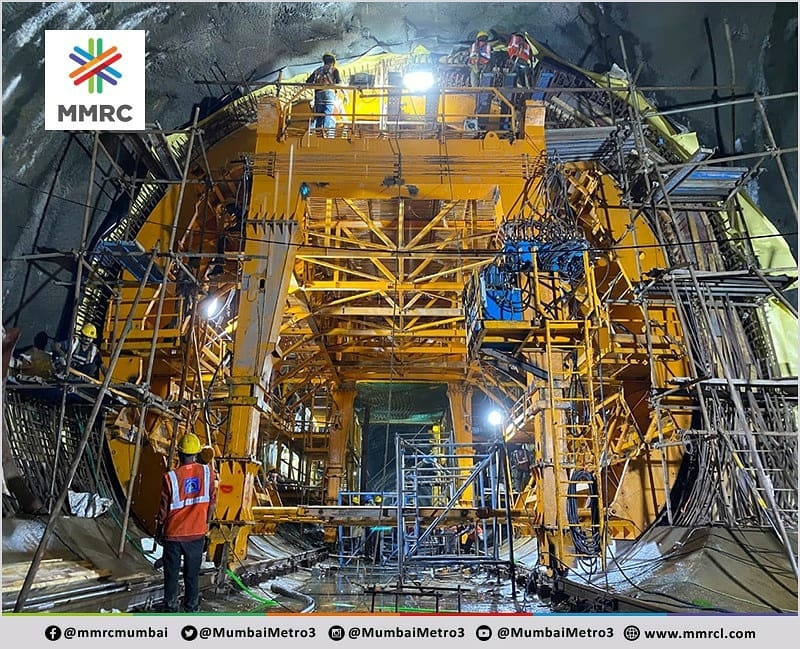 The Mumbai Metro Rail Corporation’s (MMRC) underground Metro Line 3 (Colaba-Bandra-SEEPZ) appointed contractor has initiated the modern form of platform tunnel lining work at Marol Station. According to MMRC, this station will be the first of its kind station in India that is being constructed with two parallel tunnels having 16 cross passages and 526 meters of tunnel expansion.

SK Gupta, director projects, MMRCL said that, at the Marol station site, there is already a functional elevated Metro Line 1 (Versova-Andheri-Ghatkopar) which has its viaduct. Therefore, fitting the new underground station on these constraints, such as not disturbing the existing metro operations, maintaining traffic on both sides of the roads and taking care of existing buildings was crucial. To make the process easier, we are following a modern form of the platform tunnel lining procedure.

Gupta explained, "The specialised shutter is hydraulic and it does the entire concrete tunnel lining in one go. We put a shutter having the shape of a tunnel and then pump concrete in and vibrate it through the shutter vibrators. It does nine metres of tunneling in one go and uses 90 cubic of concrete. The process requires less manpower. The quality is good and is more mechanised."

At Marol station, there will be two such shutters for up and down line platforms. Each shutter costs Rs 2 crore, said Gupta.

Meanwhile, Metro Line 3 will have connectivity with the existing Metro Line 1 station. The MMRC has acquired a private property at the exit corner of Metro 1 station, where it will have a space for entry and exit of commuters who wish to travel in the underground metro without crossing the road.

Interestingly, the modern form of concrete tunnel lining is carried out where NATM (New Austrian Tunneling Method) is adopted. On Metro Line 3, at seven stations, the NATM tunnelling is being used.