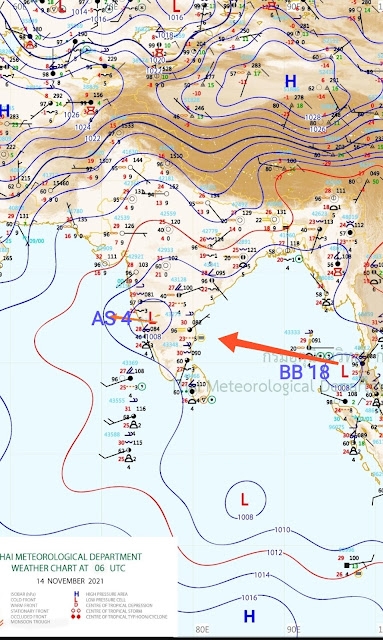 The brief spell of winter-like chill weather has passed. Maharashtra and the adjoining states are now set to witness some wet days, with thunder and lightning. According to weathermen, rain activity is expected from November 15 to November 19 in Konkan, Goa, Madhya (central) Maharashtra, Marathwada region and farther, up to South Gujarat.
Meanwhile, Mumbai is likely to receive rainfall between November 16 and November 19. This will be under the influence of the likely formation of a low-pressure system in the Bay of Bengal and its west-northwestward movement to mainland India.

“Low low-pressure area is over the Central part of the Andaman Sea associated cyclonic circulation is extending up to 5.8 km above mean sea level. It is expected to move in the West-Northwest direction and concentrate into a depression over Southeast Bay of Bengal by November 15,” according to experts from Skymet Weather, a private weather agency.

The IMD had, on Saturday, issued a ‘yellow’ alert over most districts of southern Konkan, Madhya Maharashtra and Marathwada.

Rainfall activity is likely to be witnessed in areas of Ratnagiri, Satara, Sindhudurg, Kolhapur, Solapur, Beed, Osmanabad, Latur and Nanded districts for Saturday. All these districts, in addition to Pune, Raigad, Ahmednagar and Thane, will also experience thunderstorms till November 16, said officials of IMD, Pune.

“As it moves westwards towards the Andhra Pradesh-Odisha coast, further movement will influence weather over Maharashtra. This system will bring moisture from the Bay of Bengal to parts of southern Maharashtra, as the system nears the east coast around November 15. As a result, there is a possibility of light rain and thunderstorms over Maharashtra and adjoining states,” said an official from IMD.

Skymet further stated: “In the next 24 hours, scattered light to moderate rain may occur over on Chhattisgarh, Telangana, south Konkan and Goa, South Madhya Maharashtra, parts of Gangetic West Bengal and Lakshadweep. Light rain is possible over Vidarbha, Marathwada and Jharkhand and at isolated pockets of Manipur, Mizoram, and Tripura.” Weather fluctuations increase risk of Influenza; here are some tips to protect yourself from flu