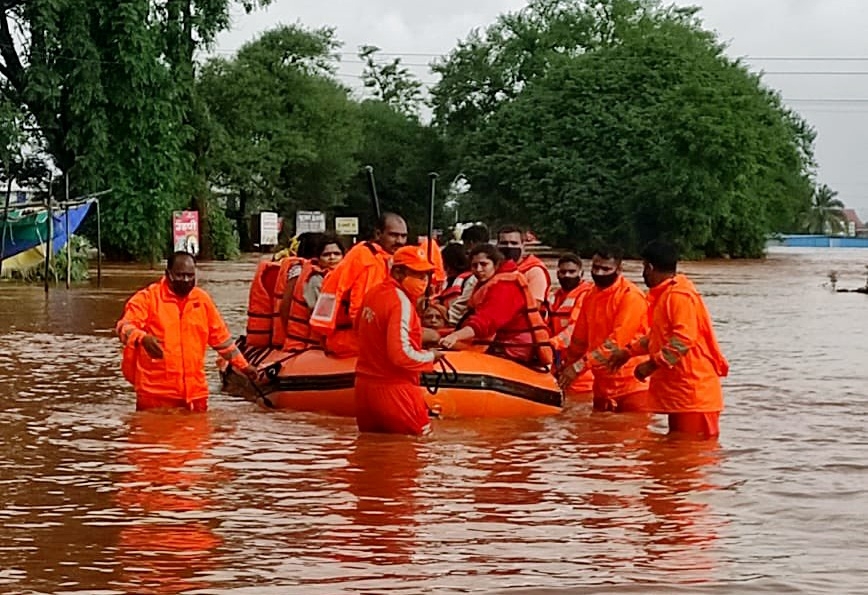 The National Disaster Response Force (NDRF) on Sunday deployed 8 more teams in Maharashtra in the flood-affected areas. Now a total of 34 teams have been deployed for rescue and relief work at various places.

BMC, which is continuously providing various civic services to the citizens of the Brihanmumbai Mahanagarpalika area, is also working promptly outside its area in case of emergency. The two teams left for Raigad and Kolhapur on Saturday.

A team of BMC has been sent to Mahad in the Raigad district to carry out relief work. "This includes two medical teams, 1 mobile medical laboratory, about 75 staff of solid waste management department, 4 water tankers, 1 towing lorry, etc," an official told ANI. Another BMC team has left for Kolhapur to take necessary action in the flood-hit areas.

About 112 people have lost their lives in rain-related incidents, 99 still missing in Maharashtra till Saturday night, said the Relief and Rehabilitation Department.

As per the state government's data, about 1 lakh 35 thousand people have been evacuated from the flood-affected areas.

"As per the data of July 24 at 9.30 pm, about 1 lakh 35 thousand people have been evacuated from the flood-affected areas. A total of 112 deaths have been reported and 3221 animals have died. A total of 53 people were injured and 99 are missing," said Relief and Rehabilitation Department.

Meanwhile, floodwater has entered the roads and fields, submerging many areas of the Sangli district in Maharashtra.