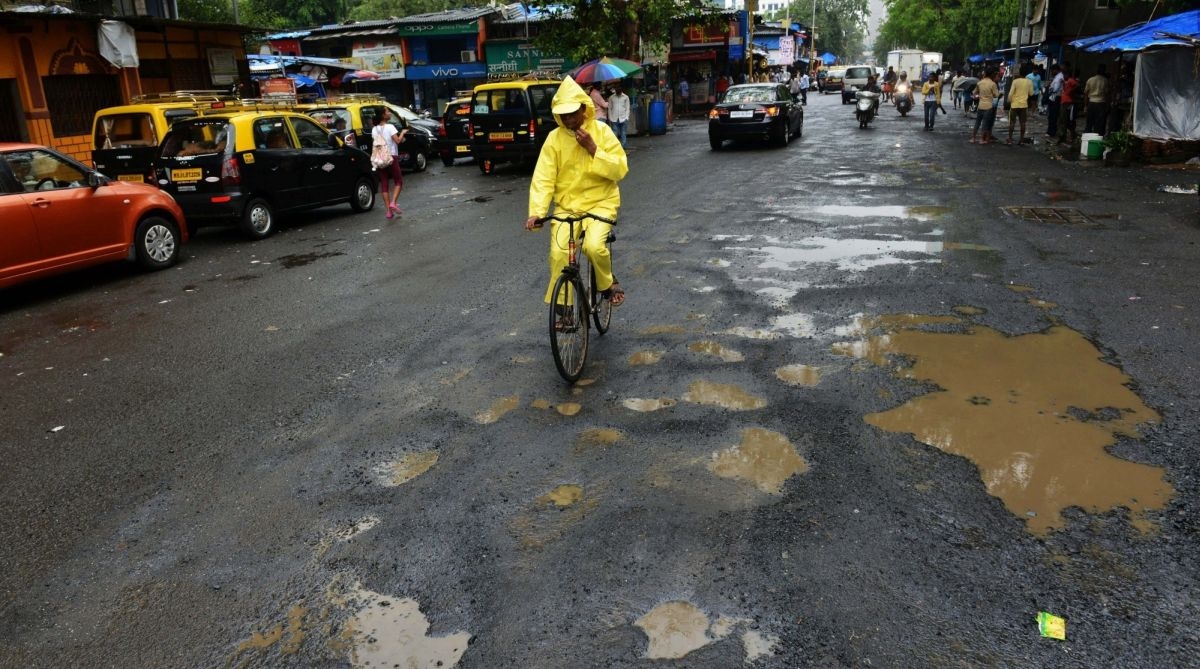 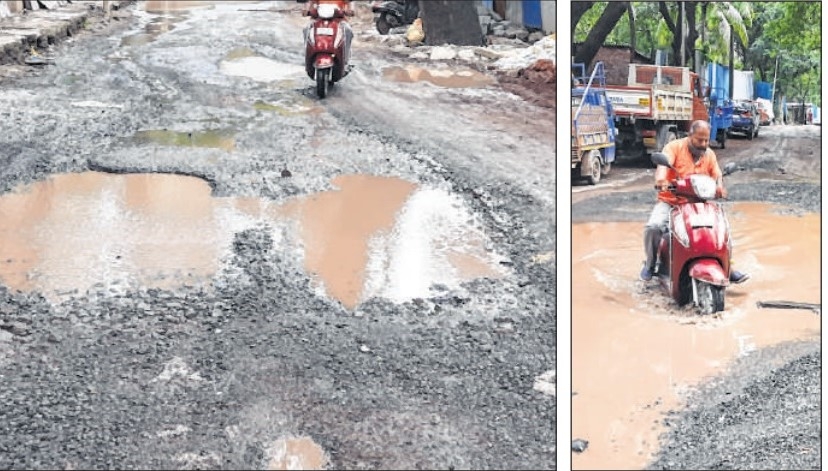 Pothole at Road No. 11, Siddharth Nagar, in Goregaon West. | Photo by B L Soni

Since the rains have lashed the city, most of the streets have been riddled with potholes. One such major pothole is at Road No. 11, Siddharth Nagar, in Goregaon (West).

Even though the potholes are filled up after repeated complaints, they reappear. The authorities just keep passing the buck. Rakesh Kashyap, a resident of Goregoan, said, “This is a low-lying area. Water-logging is witnessed every year in Moti Nagar and Siddharth Nagar. This is one of the many roads in Goregaon (West) which develops potholes. I have complained several times to the BMC. Even though they fill them up, the potholes reappear later. This shows how bad the quality of work is.” Meanwhile, a civic official from P-south ward said, “This particular road is on Mhada land. We will have to verify this first. Our officials will visit the spot and verify it and fill up the potholes as soon as possible.” 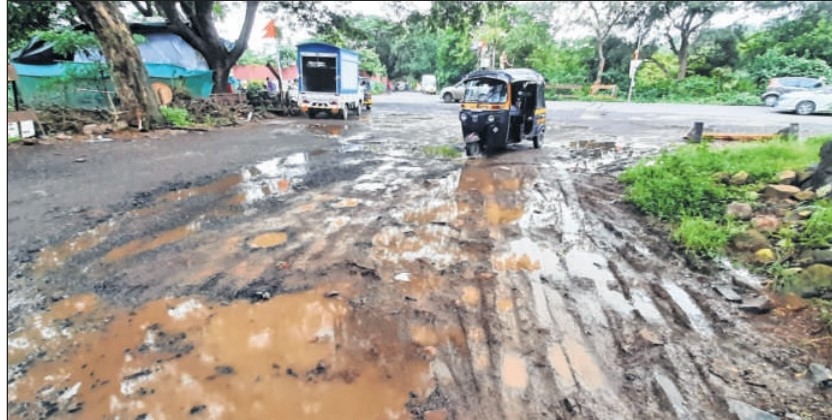 Not a smooth ride | Photo by B L Soni

Residents speak: "The stretch near the picnic spot is also in a bad state. The officials carry out temporary pothole filling work, but once the rains lash the city, the potholes reappear. This shows the shoddy work by the officials. For the last three years, the condition of internal roads has only got worse and politicians only give assurances. Last year a woman from one of the padas even had a miscarriage due to this. The responsibility of carrying out repairs is with the public works department. However, the department has been turning a blind eye to this,” said Ashok Khandve, a resident.

BMC’s response: A PWD official said, “We are temporarily filling the potholes and once the monsoon gets over, all the roads will be repaired.”

The road at Behrampada in Bandra (E) is riddled with potholes 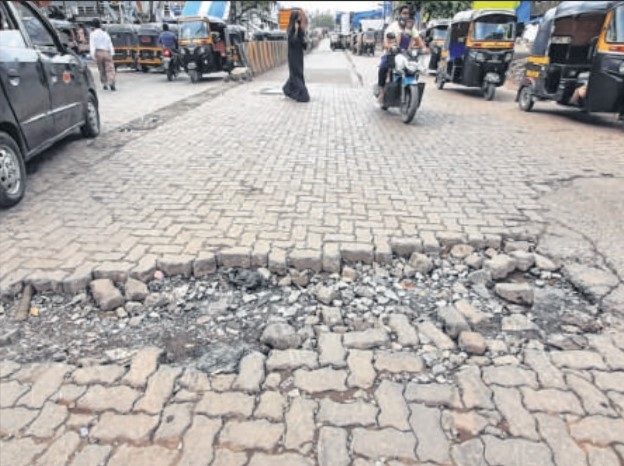 Residents speak: “Potholes have been a constant affair. Even though the BMC fills them up every year, they get washed out in the rains. The chances of accidents are high, especially at night when motorists may not be able to see the potholes. The roads in H-east ward are maintained by multiple agencies like the BMC and MMRDA. Unless a single planning agency is set up, the administration will continue to keep passing the buck,” said Irfan Shaikh, a resident.

Official’s response: “As soon as we receive a complaint on potholes, we try to fix it by sending our team. Even if the road falls under the jurisdiction of a different agency we try to do basic filling and inform the agencies by sending a letter. After the monsoon goes, a survey of uneven roads will be taken up following which repair works will be initiated, which will further reduce the problem,” said a senior BMC engineer. 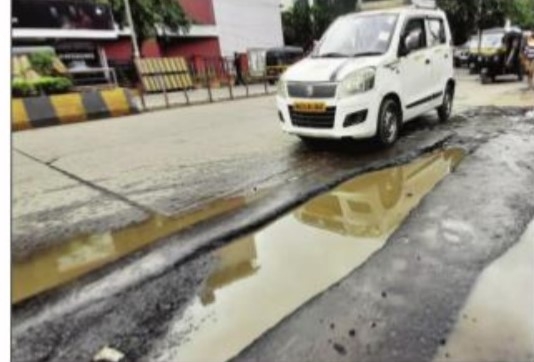 Back Breaking Journeys | Photo by B L Soni

The pothole-riddled bridge outside Bandra station 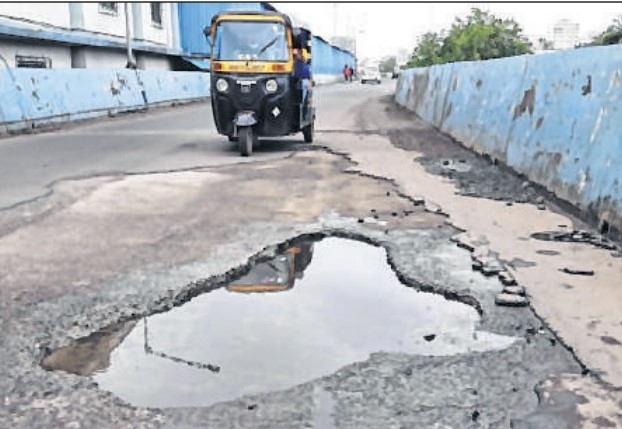 Residents speak: “The condition of the road on the overbridge, which connects the Bandra terminus with the main station road is in an appalling condition. Just before the monsoon, the administration carried out maintenance works, however, everything got washed out after the first rains, said Amir Pathan, a resident.

Officials response: “The BMC is officially responsible for the maintenance of roads, while most of the flyovers and highways are maintained by agencies. Still whenever we get a complaint of potholes in these structures we inform the local ward office and if the other agencies take longer work, our workers go and carry out basic filling of potholes,” said Parag Masurkar - Deputy Municipal Commissioner, BMC. "Repair works were taken on this road before the monsoon but the tar gets cracked and washed away as unauthorised heavy vehicles travel on this road," said an MMRDA official.

The Check Naka is riddled with potholes 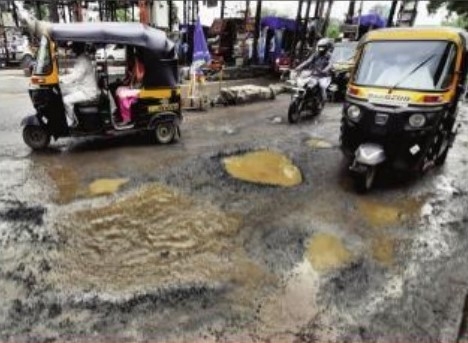 Bumpy road ahead | Photo by B L Soni

Residents speak: "This road is in urgent need of repair and maintenance. Some accidents have occured because of people's carelessness. However, most of the time, the reason is potholes and uneven patches. I will not say that the MMRDA does not repair or maintain the road. However, every time, during heavy rainfall, potholes resurface, raising doubts on the quality of the repair work done. This is an important stretch on the highway. MMRDA needs to ensure potholes are repaired properly," said Nithin Krishna, resident of Rawalpada in Dahisar.

Official’s response: “We have proper machinery in place and our team repairs the potholes as and when required"

Craters crop up every year along the Filerpada stretch in Powai

Potloads of problems | Photo by B L Soni

Residents speak: “Ahead of the monsoon, the roads are better. However, now so many potholes have resurfaced. We have approached the local ward office and they have assured us that the issue will be resolved and potholes will be fixed by the weekend,” said Madhusudan Sawant, a resident.

Official’s response: When approached a official from BMC's S ward (Bhandup, Kanjur Marg, Powai) said, "We haven't received any complaint as yet, still we will inspect the area and fill the potholes. 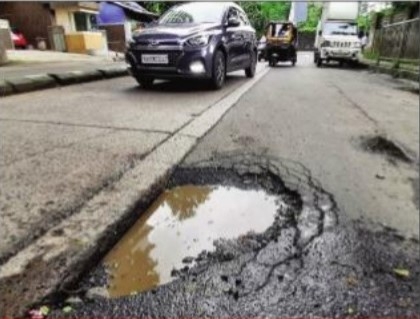 The apathy of the Brihanmumbai Municipal Corporation (BMC) in filling potholes in Mulund resulted in two traffic policemen swinging into action and completing the task last week instead. The situation in the area remains the same even today as potholes continue to plague Mulund

Residents speak: "What monsoon preparedness? We call it unpreparedness. Roads get flooded every year. Potholes follow heavy rainfall. Like other parts of the city, Mulund suffers from this problem too," said Mukund Nadar, Malviya Nagar resident.

Official’s response: "We do not leave the potholes unattended. As soon as there is a dry spell, we fill them up," said an official of BMC's T ward (Mulund and Nahur).