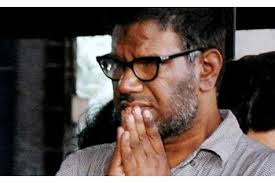 A Dindoshi sessions court, on Friday, directed the father of an accused in artist Hema Upadhyay and her lawyer Harish Bhambani’s double murder case to deposit Rs 5 lakhs before it as he had failed to produce a tempo allegedly used to dispose bodies of the victims after the crime that was returned to him on a plea.

The tempo is considered important evidence by the prosecution and is required to be identified by a witness who was present when it was recovered. Additional Sessions Judge SS Oza passed an order declaring that the indemnity bond of Ramadhar Rajbhar is forfeited and directed him to deposit Rs 5 lakhs before the court within two weeks, otherwise a warrant would be issued to recover it through the collector.

The court, on Friday, also issued a search warrant for the tempo and stated, in its order, that the expenses for its production be adjusted from the amount recovered from Ramadhar.

While handing over the tempo to Ramadhar Rajbhar by an October 2016 order, the court had directed him to execute an indemnity bond of Rs 5 lakhs and placed conditions that he will not transfer, encumber or create third-party interest over the vehicle and produce it before the court or the police station when required.

On Tuesday, Ramadhar had made a plea through his advocate stating that his son Vijay Rajbhar had been falsely implicated in the case and that the tempo had not been recovered at his instance. His plea had further said that the conditions of the order of returning the vehicle to him were not explained. Hence, he was unaware of the consequences of not producing it. He said that a family member had sold it due to poverty and that the court be lenient.

The prosecution had denied the allegations made by Ramadhar in his plea and told the court in its reply that Ramadhar was not revealing to whom he had sold the vehicle and that he had violated the conditions of the order by selling the tempo.

The court had later allowed the prosecution to produce photographs of the tempo for the purpose of identification by the witness, but the prosecution did not possess any, it had informed the court.

Hema Upadhyay’s estranged husband artist Chintan Upadhyay is an accused in the case amongst another four accused. The crime had come to light in December 2015. A scrap dealer had alerted police towards two cardboard boxes floating in a nullah. These boxes contained the bodies of Upadhyay and Bhambani. Their hands had been tied behind their backs and mouths and eyes taped shut.