The Shiv Sena Dussehra Melawa is a famous gathering held since 1956 at Shivaji Maharaj Park. Balasaheb Thackeray, the Shiv Sena's founder, started the rally, and his son, Uddhav Thackeray, carried on his legacy.

Thackeray, Shinde factions of Sena gear up for Dussehra melavas | FPJ
Follow us on

Mumbai: In the history of Shiv Sena, it was the first time that two leaders claiming to run the same party held giant rallies in different areas of Mumbai.

A huge crowd was recorded at both the rallies held by Eknath Shinde and Uddhav Thackeray in Bandra-Kurla Complex and Shivaji Park.

The Free Press Journal tried to find out whose speech resonated well with the audience. In our poll on Twitter, it was found that the speech of former Maharashtra CM Uddhav Thackeray drew most applause as compared to the one by current chief minister Eknath Shinde.

As per the Twitter survey conducted by Free Press Journal, out of nearly 300 votes, 59.4 percent went in favour of Uddhav Thackeray while 33 percent liked the speech of Eknath Shinde. The rest 7.6 percent felt none of their speeches were impressive.

The rallies of the rivals saw sea of people but reports state Uddhav's rally at Shivaji Park had a larger audience, considering the legacy of the venue.

In all, Thackeray faction claimed that over 2 lakh people attended the gathering whereas Shinde's group said their rally had 3 lakh attendees. According to Mumbai police, Shivaji Park has the capacity of 80,000 people and MMRDA Ground has capacity of 1 lakh.

Although, Uddhav Thackeray kept the Sena tradition by holding the Dussehra rally at Mumbai’s Shivaji Park, he suffered another setback as his brother Jaidev Thackeray joined the Eknath Shinde fold, pledging full support to him.

Nihar Thackeray, nephew of Uddhav Thackeray, was also present in the venue sharing stage with Eknath Shinde. He is the son of late Bindumadhav Thackeray, the eldest son of Sena founder Bal Thackeray.

Nihar Thackeray, who has stayed away from politics all this while, is married to the daughter of BJP leader and former state minister Harshvardhan Patil.

In his speech, Uddhav slammed Chief Minister Eknath Shinde and rebels, claiming they were traitors. "Traitors have become ministers only for a short time. However, the stamp of the traitor is permanent and that stamp cannot be erased, "he said. He called upon Shiv Sainiks to be ready to defeat the traitors in the upcoming elections in Maharashtra.

We did not do 'Gaddari', we did 'Gadar' (rebellion): Shinde

Whereas Maharashtra Chief Minister and Shiv Sena Chief Leader Eknath Shinde stepped up his attacks on his former boss and Shiv Sena President Uddhav Thackeray at the first Dussehra rally on Wednesday at the BKC ground, alleging that he sold his father and sold his thoughts. Shinde countered Uddhav’s charge of being traitors and said, "We did not do 'Gaddari', we did 'Gadar' (rebellion)." 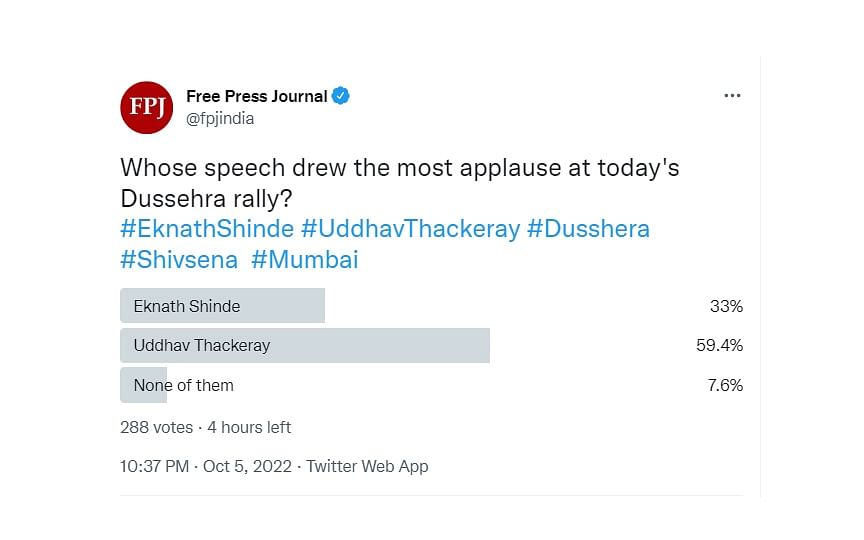 During the online survey conducted by the Free Press Journal during Shiv Sena Dussehra rally, 59 per cent liked the speech of Uddhav whereas 33 percent chose Eknath Shinde and 7.6 per cent chose non of them. |

The Shiv Sena Dussehra Melawa is a famous gathering held since 1956 at Shivaji Maharaj Park. Balasaheb Thackeray, the Shiv Sena's founder, started the rally, and his son, Uddhav Thackeray, carried on his legacy.

Following a shocking political shift in Maharashtra, 50 Shiv Sena MLAs, led by Eknath Shinde, formed a government with the Bharatiya Janata Party in June.After that, the rally was in the limelight as both the fronts reached the Bombay High Court seeking permission to hold the rally at its original place, Shivaji Park.

Later, the court allowed Thackeray to conduct the event at the same place. However, Eknath Shinde announced his rally at MMRDA grounds in Bandra Kurla Complex. Meanwhile, as per the pictures available on news agencies and social media, people in large numbers gathered for both the rallies.