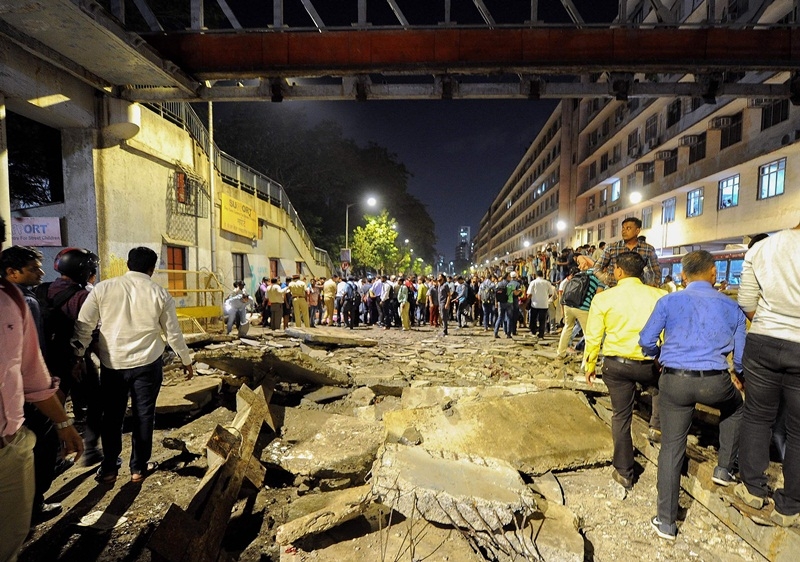 Onlookers and office goers gather around rubbles of a footbridge outside the Chattrapati Shivaji Maharaj Terminus railway complex in Mumbai on March 14, 2019. - Four people were killed and dozens injured when a footbridge collapsed near Mumbai's main train station on March 14, the latest accident to highlight creaking infrastructure in India's financial capital. (Photo by STR / AFP) |

Mumbai: Neeraj Desai, the structural auditor of the Himalaya bridge near Chhatrapati Shivaji Maharaj Terminus (CSMT), which collapsed on March 14, was sent to judicial custody till April 10, on Thursday.

Desai was arrested on March 18, from Andheri. During the investigations, Desai revealed, he holds a master of engineering (ME), was given a contract to conduct the structural audit of the Himalaya bridge, which he sub-contracted to a Vadodara-based company- Geo Dynamics.

Two weeks after the bridge collapsed on March 14, killing six persons and injuring at least 31 others, police have now questioned the officials of Geo Dynamics firm, to ascertain their role in connection with the tragedy. Abhishek Trimukhe, deputy commissioner of police (zone 1) said, “We have recorded statements of the company which audited the Himalaya bridge in 2016.

The officials said, they were given a few pointers by Desai, which were tested and accordingly a final report was prepared.” Along with the Geo Dynamics officials, police have also recorded statements of several engineers of the Brihanmumbai Municipal Corporation (BMC), who were also part of the process of repair and maintenance team.

The dcp claims the contractor and sub contractor did do anything deliberately, despite being aware of their negligence.  “The owner of the company, which had carried out the tiling work on the Himalaya Bridge, was also summoned for questioning.

One thing has to be noted that people accused in this case were aware their negligence could cause the death of people, but they did not want the bridge to collapse. Police are investigating the matter with the help of technical experts and more arrests are likely to be made in the coming days,” said DCP Trimukhe.