Coronavirus in Mumbai: Ward-wise breakdown of COVID-19 cases issued by BMC on July 28

At 39, the city recorded its third-lowest single-day fatality count so far, it said, adding that the toll now stands at 6,119.

The lowest one-day death toll at 39 had been reported on July 6 and July 11.

27 of the 39 deceased had underlying health conditions, according to the BMC.

In more good news, Mumbai's recovery rate has improved to 73 per cent while the case growth rate declined to 1.03 per cent. The average case doubling rate has also gone up to 68 days, the BMC said.

With 1,706 patients being discharged in the day, the number of recovered cases increased to 81,944, the BMC said.

Mumbai now has 21,812 active cases. A total of 859 new suspected patients were admitted in hospitals during the day, it said.

At present, R-Central ward that includes Borivali and other Western suburbs has the highest growth rate of 1.8 per cent.

H-East ward comprising Khar east and Bandra East has the lowest growth rate of 0.5 per cent, as per the civic body.

K East ward comprising Andheri east and Marol has the highest caseload of 7,055 in the city whereas B ward which includes Dongriand Mohamad Ali Road areas has the lowest 937 cases.

The highest number of active cases are in the P-North ward while B ward reported the lowest number of cases at 184.

At 442, the highest number of deaths were reported in K-East ward comprising Andheri (East), MIDC SEEPZ, Marol, Vile Parle (East) and Jogeshwari (East). This ward is dominated by slum areas.

A ward comprising posh areas like Churchgate, Colaba, and Navy Nagar has reported the lowest number of fatalities.

Here are the details of ward wise cases in Mumbai till July 27. The update is provided by the Brihanmumbai Municipal Corporation (BMC) on July 28: 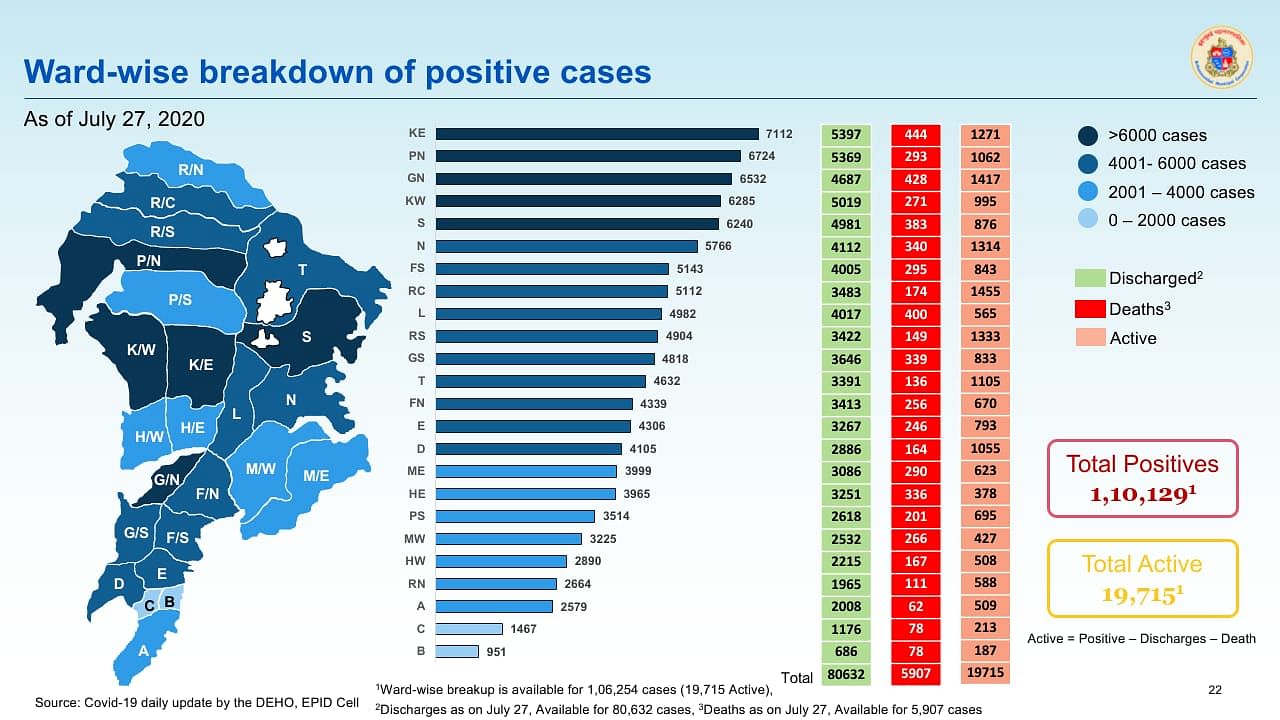 Breakdown of ward wise cases in Mumbai till July 27. | BMC HomeMumbaiCoronavirus in Mumbai: Ward-wise breakdown of COVID-19 cases issued by BMC on July 28