They have also appealed to citizens to come forward to donate blood, ever since Diwali, there has been an acute shortage of blood in the city, affecting patients.
Swapnil Mishra 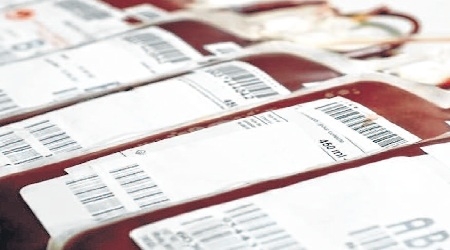 Mumbai: Following the death of a patient at the Tuberculosis Hospital in Sewri on November 20 for want of A+ve blood, the state blood transfusion council (SBTC) has ordered all the blood banks in the city to submit a report on their stock for the last one month, within the next seven days.

They have also appealed to citizens to come forward to donate blood, ever since Diwali, there has been an acute shortage of blood in the city, affecting patients.

Arun Thorat, assistant director, SBTC said they did not receive any information about this patient and were also caught unawares about the shortage of blood at the King Edward Memorial (KEM) hospital.

“It is unfortunate that the patient died for want of blood. We have issued a notice to all the blood banks, asking them for a report of their available stock for the last one month,” said Thorat.

Currently the city only has enough stock for 4-5 days. “We currently have around 4,500 units in all banks put together, whereas Mumbai’s daily requirement is around 800-900 units. Barring this festive period, we usually have a collective stock of between 7,000-10,000 units,” said an official.

Thorat said the period from Diwali onwards is usually when stocks are low. “We have written to several corporate entities, requesting them to organise blood donation camps after Diwali holidays. I have also urged people to donate blood whenever camps are held in areas where they live,” he added.

Too late for Varsha, 28 Varsha Mehare, 28, suffering from drug-resistant TB, died on November 20 as the hospital failed to arrange two units of A+ve blood for her.

The family had approached the blood bank at KEM hospital which was also unable to help but got in touch with NGOs, activists and multiple blood banks. However, by the time the blood could be arranged, it was too late for Varsha.