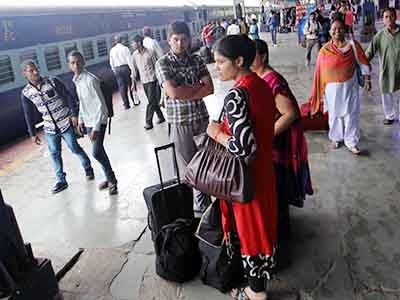 Mumbai : It had been over 24 hours of restlessness and anxiety for 35-year old Kursheed Alam, who had gone to receive his son at Kalyan railway station on Wednesday morning where he was told that the Janta Express, in which his son was travelling, has been derailed in Harda.

Kursheed finally heaved a sigh of relief after he met his 15-year old son, Salman Alam, at Kalyan on Thursday morning. Kusheed’s son is amongst the hundreds of people who reached Mumbai on Thursday morning and were reunited with their family.

Salman, who lives in Bihar, is the eldest son of Kursheed, who is a father of three. He was on his way to Mumbai to meet his father when coach s-11, in which he was travelling, derailed while it was approaching Harda.

Salman was about to go to sleep when he felt a sudden jerk as the coach tilted to one side. He said, “It felt as if I would die and this was the end of everything. The driver applied sudden brakes and the coaches fell off. It was all in a split second and then we went outside to find that the tracks were submerged in knee-deep water.”

Salman, like hundreds of other passengers, got off the coach to take stock of the situation. He said, “Some were searching for their relatives, we could see coaches of another train scattered around the tracks. Some of the commuters decided to walk to the trains which they said was 2 km from the accident site.

There was no help for another 30 minutes before the locals could reach us. Also, it took a similar amount of time for the railway authorities to reach us. Another official said that a man was stuck in the wires and will have to be removed, which took them another 30 minutes.”