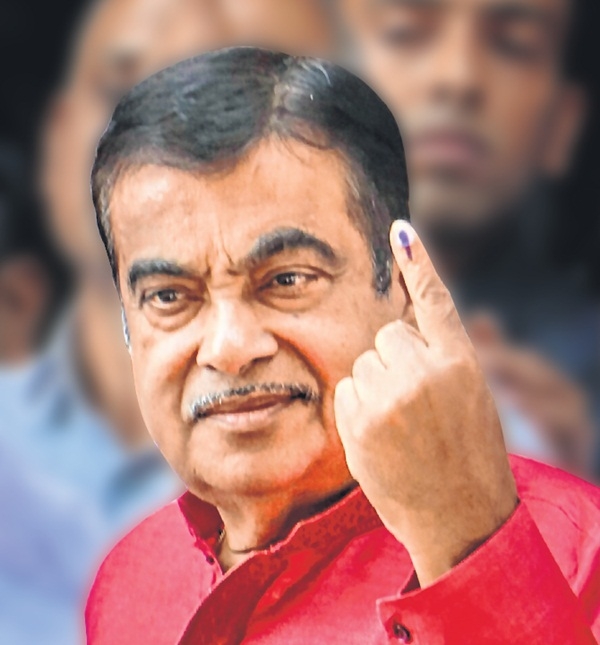 Mumbai: Vidarbha went to polls in the first phase on Thursday with voter fatigue all too apparent — blame it on the weather or politics. The temperature in Vidarbha has been oscillating in the 39 to 41 degrees Celsius range. This, coupled with the double anti-incumbency factor – since there is a BJP-led government in both at the Centre and in the state – dampened the sentiment, as against the enthusiasm in the 2014 polls.

In 2014, the average turnout was 64.15 per cent, whereas on Thursday it was just 56 per cent. A political observer from Chandrapur claimed that the Kunbi factor was working against the BJP-Sena candidates. However, another observer from Nagpur claimed that union minister for shipping Nitin Gadkari was likely to be re-elected from Nagpur despite the double anti-incumbency.

Gadkari is the bridge between Nagpur (read RSS) and Delhi and is being seen by some as a ‘compromise’ candidate, in case the BJP falls short of majority and is under pressure to change its prime ministerial face. In Nagpur, a low turnout of 53.13% was recorded with Gadkari coming out to vote with his entire family. CM Devendra Fadnavis, his mother and wife Amruta also cast their votes.

Gadkari’s rival is Nana Patole of the Congress – a BJP import — who is expected to put up a tough fight. Incidentally, Patole is a Kunbi; that makes him an OBC and a member of a farming community. Farmers are upset with BJP for various reasons, especially the ham-handed handling of the loan waivers.

“There are over 3.5 lakh Kunbi voters who are upset with Gadkari, as he has not completed a single infrastructure project. Muslims are against the BJP, 60 per cent of the Dalits have traditionally rallied around the Congress, while the rest are supporting Prakash Ambedkar-led Vanchit Bahujan Aghadi,” said Pramod Kakade, a political observer. ‘‘This suggests that it will not be a cake walk for Gadkari,’’ he added.

Trade union leader Pramod Mohad said, “In the outer areas of Nagpur and in rural areas, people seem to be in the favour of the Congress, whereas in Nagpur city, they may vote for Gadkari as he is a ‘bhumiputra’ (son of the soil). Patole is a candidate from another constituency and people do not know him too well.” In Naxal-dominated Gadchiroli, voters defied threats to come out and vote.

Naxals had put up posters threatening voters with dire consequences. The turnout in Gadchiroli was 61.33 per cent, the highest for the seven seats in Vidarbha. In 2014, a 70.04 per cent turnout was recorded despite the temperature being 41 degrees Celsius.

Voters were seen in long queues, waiting to cast their votes in rural areas of Gadchiroli. In the fray are Ashok Nene of the BJP and Dr Namdev Usendi of the Congress. “The friction among tribal groups will help the Congress candidate in Gadchiroli,” feels Kakade.

For the first time, the Congress gave a ticket to a member from the Kunbi community in Chandrapur. In Chandrapur alone, they are around six lakh in a kitty of 18 lakh voters. Balubhau, alias Suresh Dhanorkar, is the Congress candidate against BJP’s Hansraj Ahir, the union minister of state for home affairs.

“In the 2014 polls, there was a Narendra Modi wave, hence the turnout was huge. Voters had expressed their anger against the ruling Congress government at the centre. Modi spun the yarn of development and people voted for him. This time, the situation has reversed.

The low turnout will go against the BJP, since people want to express their anger against false promises given by Modi,” said Venkatesh Kesari, a senior political analyst. He added that if the opposing Congress and the Nationalist Congress Party (NCP) grab five of the total 10 seats in Vidarbha, there are chances of the BJP losing at least 20 of the total 48 seats across the state.