Organised by The Land of Thousand Islands, the chef is in the city for a seven-day Indonesian Culinary Fair at Trident.

Chef Vindex Tengker | Pic: The Tilted Lens
Follow us on

Indonesian chef Vindex Tengker has an interesting story that follows his illustrious career as a chef. He is one of Indonesia's finest culinary experts and a household name thanks to his many TV appearances. He appeared as a judge on MasterChef and Top Chef Indonesia.

Born in Manado, North Sulawesi, Vindex started his culinary career when cooking was considered a woman's job and not many men were in the kitchens. He learned some classic traditional dishes from his grandmother and grew up learning the essentials of Manadonese cuisine. His interest in culinary arts took him to different parts of the world in the last 33 years since he started his journey in 1989. 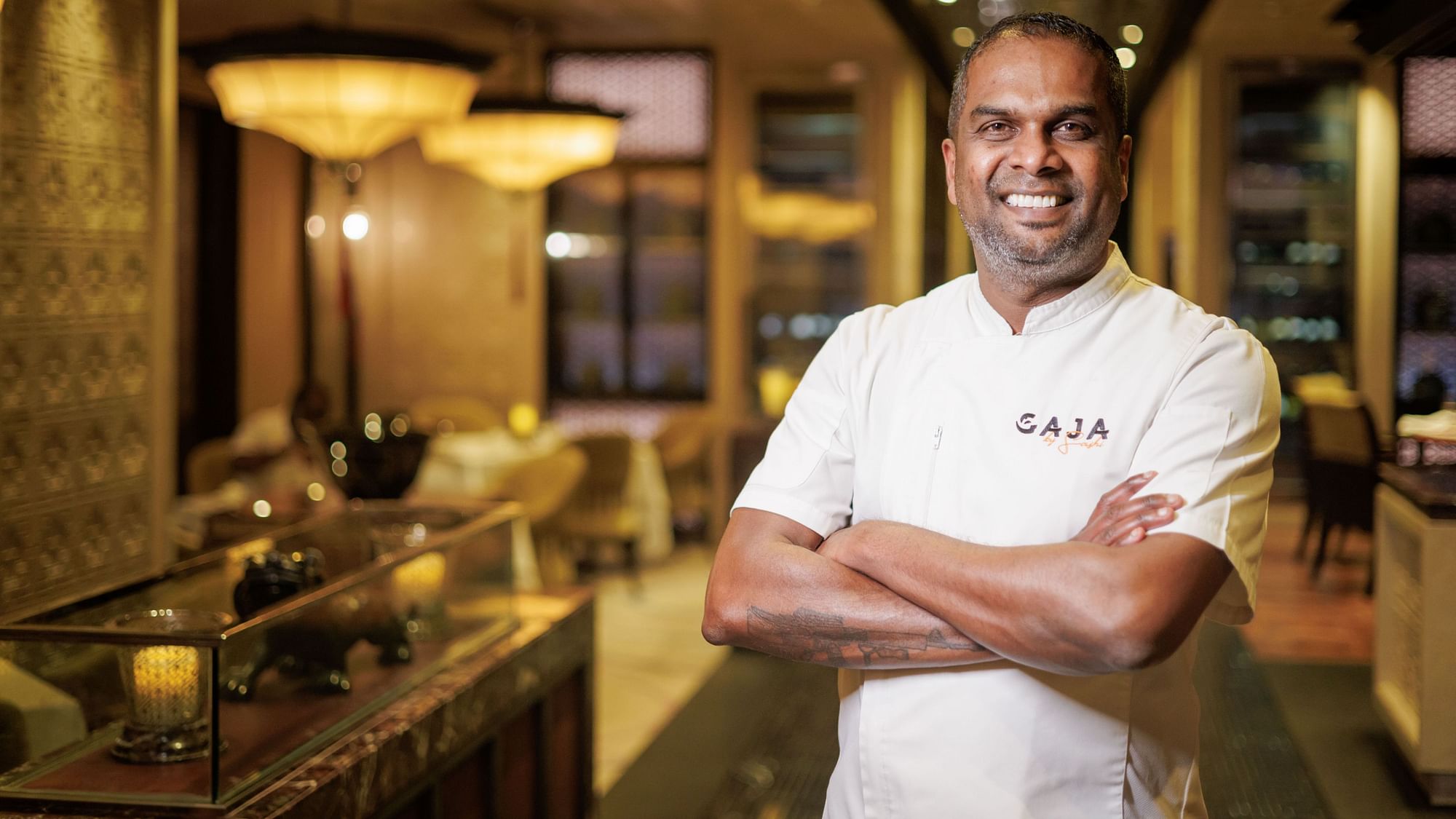 The chef is in Mumbai as part of a seven-day Indonesian Culinary Fair at Trident, organised by The land of Thousand Islands, Indonesia. Vindex with a team of four other chefs has curated an exclusive menu inspired by Indonesian culinary diversity. Expect fine flavours of Gado Gado Roll, Soto Ayam, Nasi Kuning, Nasi Goreng, Babur Ketan Hitam, and much more made with locally sourced ingredients.

We learn that Vindex is equipped with skills in many international cuisines — Thai, Malaysian, Indian, European, Mexican, and Californian along with Asian fusion cuisine. "I make very nice Butter Chicken as well," Vindex quips as he presents his specially curated delicious vegetarian version of Gado Gado Roll and Asian Jakarta before us.

The cabbage roll filled with tofu and beans, the Gado Gado Rolls were delightful. We loved Vindex's special preparation of Asian Jakarta with vegetables and fruit slaw topped with peanut chili dressing — an exotic and healthy version of the Indian Bhelpuri. We get chatty with Vindex at Trident's in-house restaurant Frangipani about his signature creations, unexplored flavours, and regional dishes of India. Excerpts: 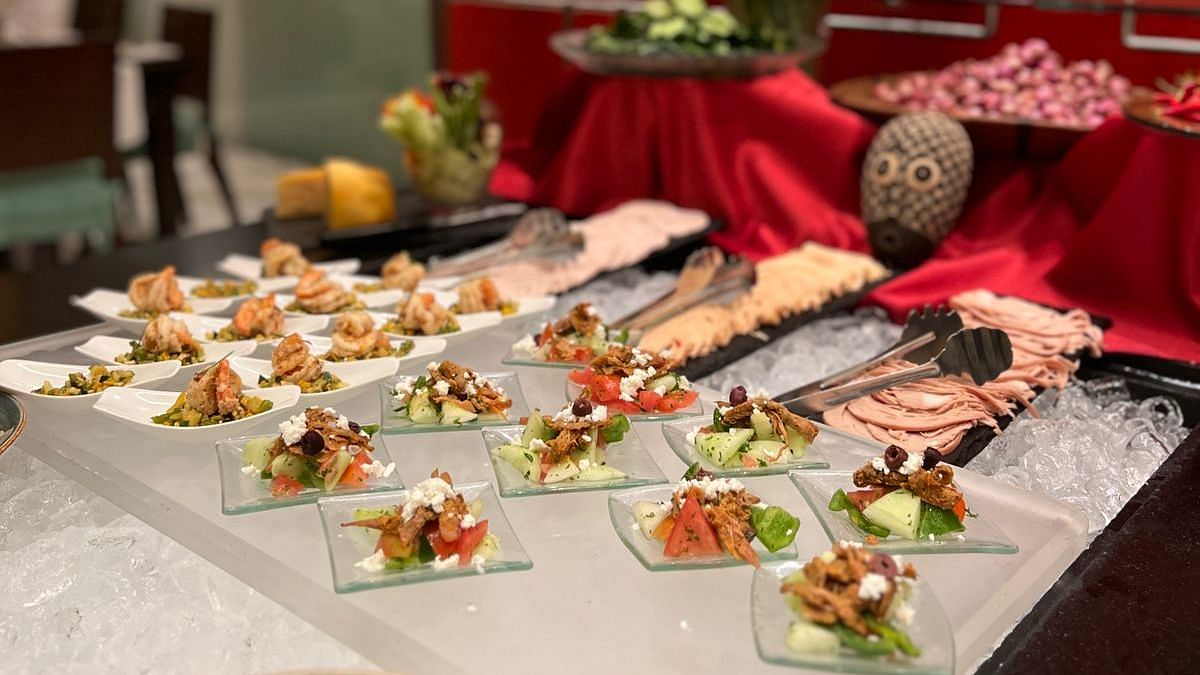 Do tell us about the inspiration behind this exclusive spread at Trident.

We want to make our Indonesian dishes available in restaurants in India and make people aware of Indonesian cuisine and its versatility. There are more than 17,000 Islands and many provinces in Indonesia with different cuisines and tastes. There is a huge difference in the food from different regions within Indonesia. In some places, we use a lot of spices, in some places the food is curry heavy and there will be no spices, some places will have Chinese influence, so we have curated a balanced aromatic menu that represents Indonesia as a whole. We wanted to pick some traditional dishes from Indonesia starting from starters, to main courses and soups.

What does food mean to you?

It is art and life. I live with food and throughout the journey, my personal and professional experiences are with food. Food brings things together for me. Through food you can know more about culture, people, and many things. There are many stories to tell through food. Food is an experience. Every time I travel I love to serve food and they love it, even if they haven't tried Asian food before but they like it in the end. It carries stories from one generation to the other. 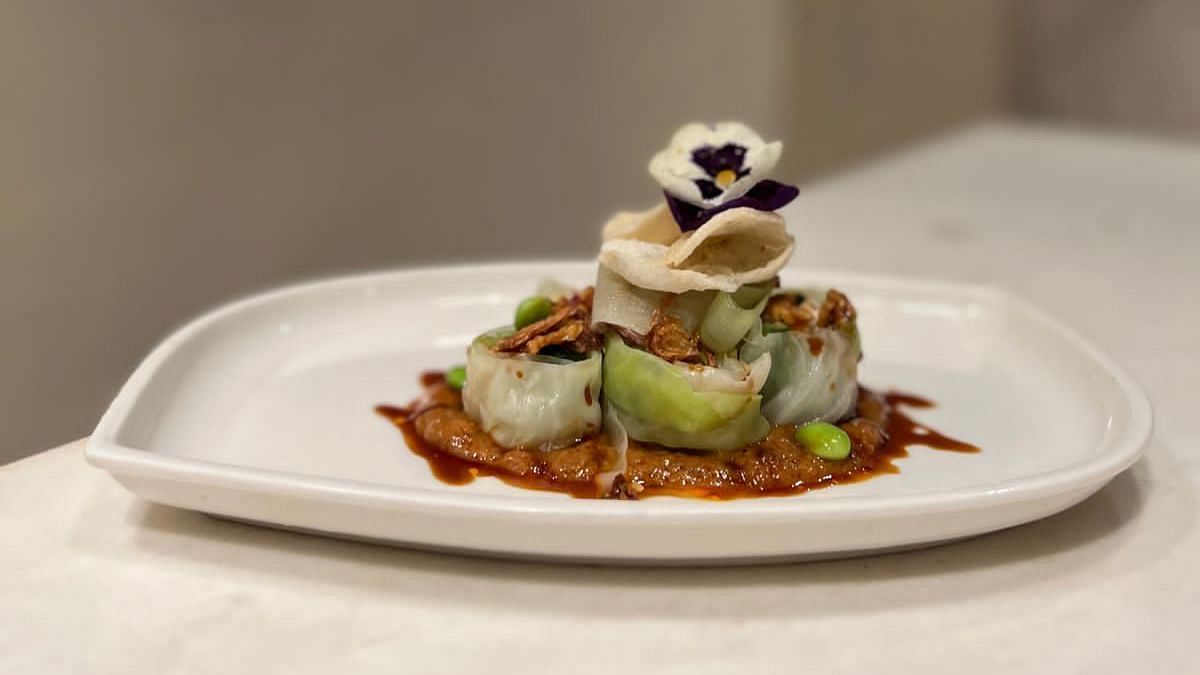 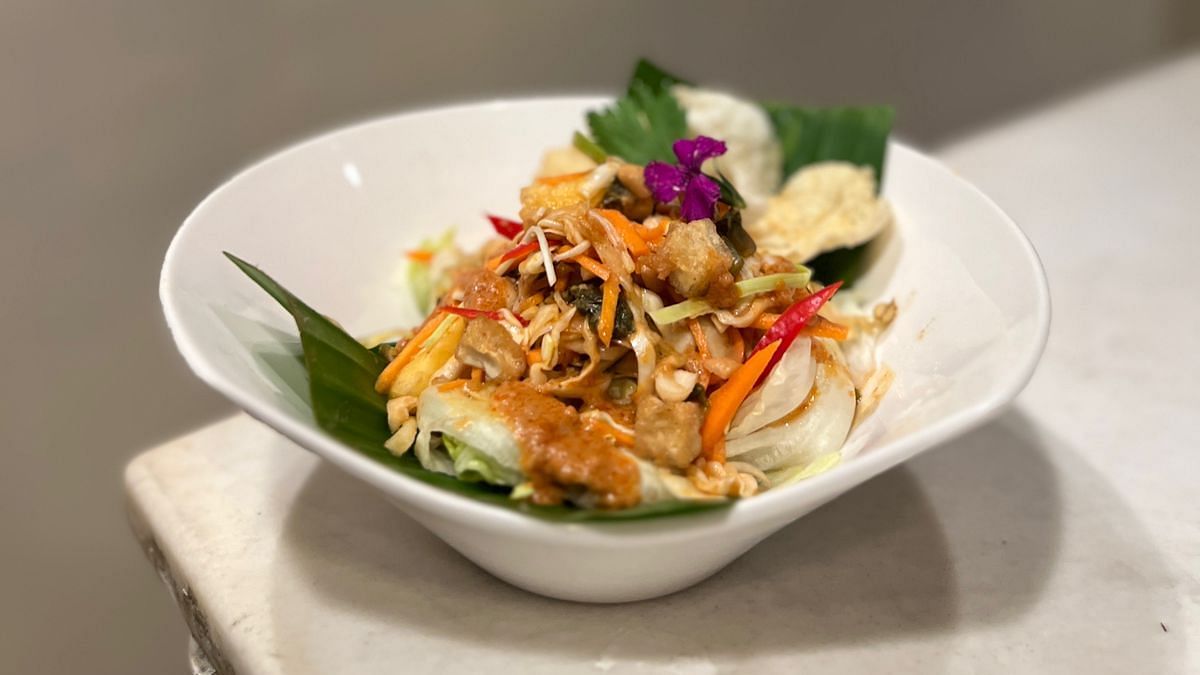 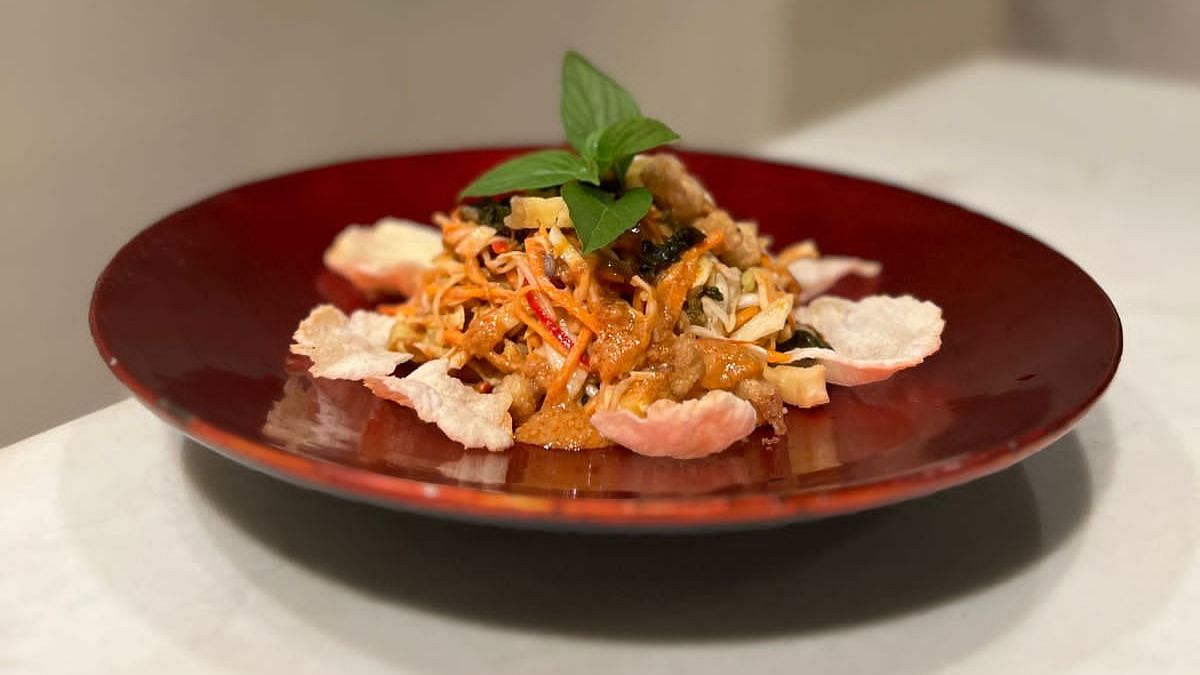 How did your introduction to cooking happen?

When I started working in 1989 and studying at a culinary college, no one wanted to be a chef. There were no men in the kitchen, it was only for women. There were only one or two provinces where men were cooking, Bali was one of them. There is one province in Indonesia where during a traditional ceremony in the house, men do the cooking, and women do other things. That's when I learned that men can cook and got the inspiration. I learned several dishes from my grandmother. I started working in a kitchen with no more than chopping and dressing the food. Incidentally, a big hotel chain was looking for an Indonesian chef who could learn 40 dishes in two weeks. There were some dishes that I never heard before. I went for that interview by accident because I wanted to go to Bali and get out of Jakarta where I was living. I only knew a few spices and ingredients but they gave me recipes and ingredients, everything marked with pictures to make it even easier. Despite less experience than required, I got the job because I followed the recipes I was given. Nothing less, nothing more. And later I learned that I got the job because I was ready to learn. They wanted someone who wanted to learn with them and follow their standards.

While following what is already there, one may miss experimenting and learning new things. What are your thoughts?

With the evolving cuisine and kitchens around the world, to be able to keep yourself alive and updated you have to do some experiments. But if you have come for basics, you have to learn the basics. If you want to make an authentic traditional recipe you have no scope to experiment because it is patented with the ratio and ingredients. If you change it, it's no longer authentic. You can always curate a new dish which is the right experiment that eventually may become a classic dish. Experimenting to some extent is good for modern dishes, a classic dish has to be as it has always been.

How important is it for you to reinvent yourself?

We have to stay updated and reinvent ourselves with how we make things with new technologies. How to use the combinations and local ingredients. How can we help develop traditional recipes that can speed up the process? There used to be a time we used to cook Rendang (Indonesian curry with meat/beef) for six hours. You need to develop and evolve to curate that perfect dish. You have to learn to fuse various ingredients. I was in LA and another chef was from Iran, we infused many foods together and it was good. But it can only be done when you know the basics of both. These days chefs consider fusion a modern thing and confuse themselves with that. They want to make things western without knowing the basics of it. 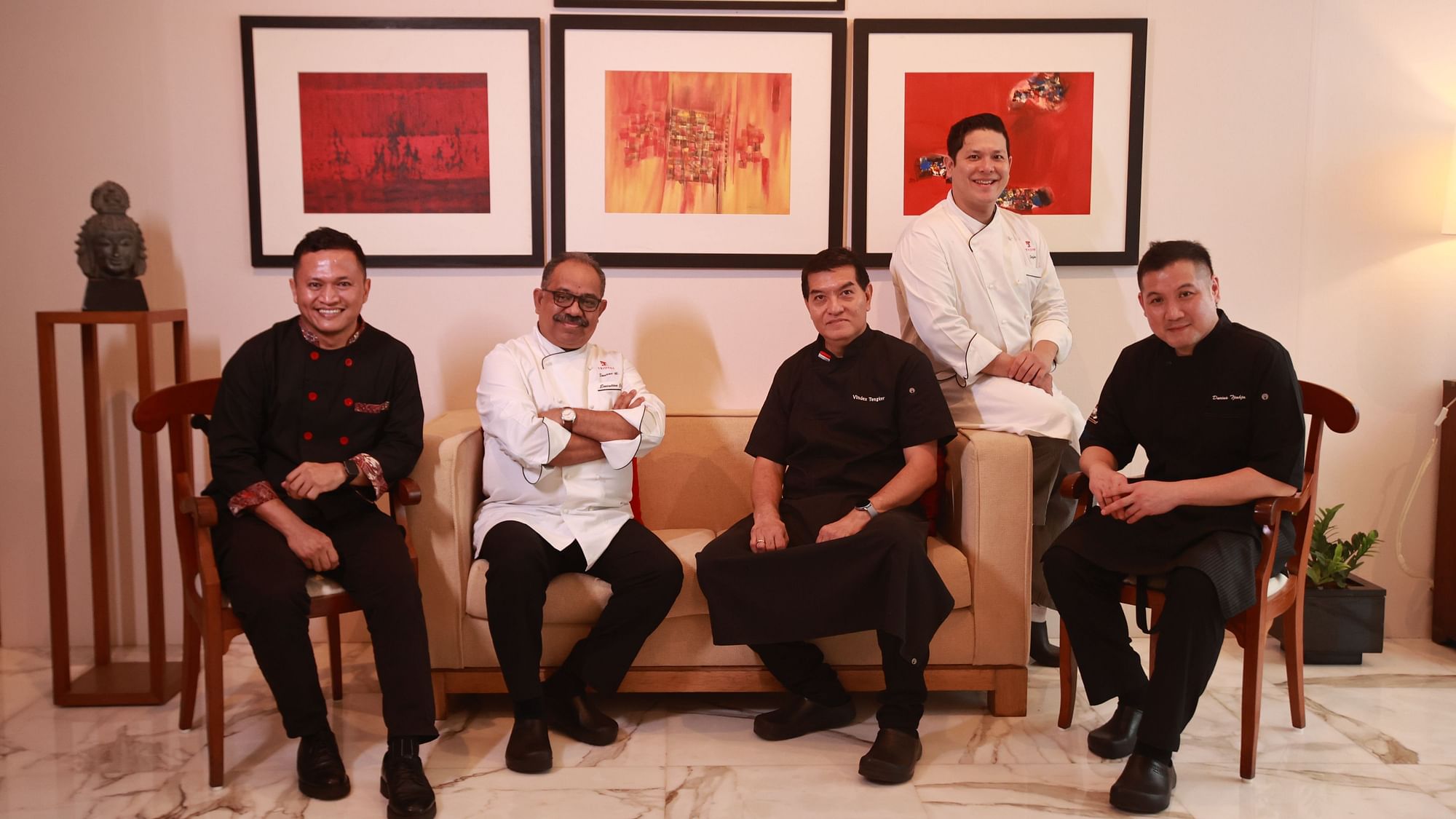 Chef Vindex Tengker with his team | The Tilted Lens

What are the changes that you've seen in the culinary world in the last 10 years?

Food has become a fashion. Things have come and gone and have come back again. In the last ten years, palates have changed. People are accepting spicy food unlike before and ingredients have become available. Now you have every ingredient from every place available everywhere. You can create any food anywhere.

What is your idea about Indian culinary culture?

Indian food for me is not new. I have been working with many Indian chefs and we have so many Indian weddings in Indonesia. There are many Indian restaurants there. Though, they have made some changes to match the local palates, the basics remain the same. In India, I think spices are important and people enjoy variations in their food. I want to introduce some Iconic Indonesian dishes to India.

Your favourite dish to cook

Curry and coconut based dishes, especially from Sumatra

Your favourite dish to eat