With rustic charm of seaports and excellent craftsmanship, these extraordinary water palaces and magnificent marine forts of India will take your breath away

Whether it was the Mauryas, Marathas, or Nizams in the south or the Rajput clans in Rajasthan, India has a rich history of different dynasties ruling it. And while ruling, they built many forts throughout the country, each with its own architectural pattern.

Interestingly, to showcase their architectural marvel, these kings built forts and palaces not only on the land but also in and on seas and water bodies. With the rustic charm of seaports and excellent craftsmanship, these extraordinary water palaces and magnificent marine forts of India are still breathtakingly beautiful.

So, when you plan your next holiday, check out these sea forts and we ensure you these will give you the same thrill like any other adventure sport. Moreover, exploring these places will be on your budget and only enhance your knowledge of India's rich history.

Here are five forts from India that are constructed between seas and lakes: 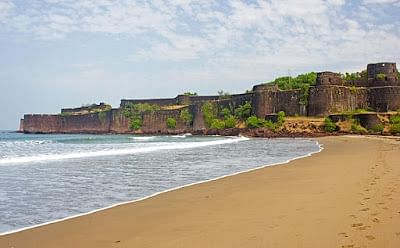 First built in 13th century by Raja Bhoj during Shilahar dynasty, it wad captured by Shivaji Maharaj from the reign of Adilsah of Bijapur in 1653. It performed as a naval base for Maratha kingdom in 16th century. Earlier, this fort was named Gheria because it was surrounded by the sea on three sides. It was named Vijaydurg after Shivaji Maharaj conquered it in 1653. And later, he developed the 17 acres fort, which was used to harbor and repair Maratha warships.

Situated on the mountains of the Vaghotan river, which separates the two districts of Ratnagiri and Sindhudurga, Vijaydurg is the largest fort in a coastal region and has exquisite architectural detailing.

The traditional Indian features of the fort make it highly admirable with its laterite stones that are used to build a 10-meter-high compound wall —300 feet away from the fort deep in the sea which used to defend the fort against the attacking ships.

How to reach: Rajapur Road and Kankavli railway station are the closest railway stations to reach Vijaydurg. State transport busses are also connected to Vijaydurg and the nearest cities. The name of this fort comes from the Arabic word "zizera," which means 'an island.' This fort was built in the 15th century by the Koli fishermen of Rajpura village on a rock in the sea, which was taken by the Siddis. This fort is spread over a vast area of about 22 acres, and there are 19 towers mounted with cannons and many turrets.

Inside this fort are two sweet water tanks. It is said that the last family to have occupied the fort was an uncle-niece duo. This fort holds a great warrior history of many rulers, like the Marathas, Mughals, Portuguese, and the British.

How to reach: The nearest place to reach Jangira fort is from Alibaug city center, which is around 50 km away and will take around 1–1.30 hours to reach by road. This Portuguese style fort was built by D. Nuno da Cunha in 1535 and was formally known as Fortaleza de So Tomé. The fort holds a history dating back to the 15th century, when the Portuguese ruled the now Union Territory of India for around 424 years. Later, this fort was reconstructed by D. Joao de Castro in 1546.

Spread over the area of 5.6 hectares, the fort is surrounded by sea. The fort's outer wall is built along the coast, and the inner wall had defenses that had guns mounted on them. These walls are named after Christian saints. There are three gates to enter the fort with five large creatively crafted windows and stone galleries. While walking on the bridge leading to the fort, you will be mesmerised by the beauty of the fort as well as the surrounding with the bridge flaunting Portuguese inscriptions.

How to reach: There is no regular trains to Diu from other major cities of the country. The nearest Railway station is at Veraval which is located at a distance of 63kms. You can take a local taxi and reach Diu in two hours. Spend at least two days in this small territory. The exact era during which this fort was built is unknown, but it is believed that the fort was built during the early days of the Chirakkal Rajas. It is said that the Koteyar/Ramakshatriya community found Bekal and other forts in Kasargod, which were brought to boost the defense.

Even in the era of Tipu Sultan, this palace was used as a major and important military station for his army. In archaeological excavations, many coins and other antiques excavated show the firm presence of the Mysore Sultans as well. After the death of Tipu Sultan, this fort came under the control of the British East India Company, and even in the British era, this fort had a memorable importance as it was used in major military and administrative ventures.

Today, this fort is an international tourist destination and a favourite shooting locale for film and ad makers.

How to reach: You can reach here via train, and the nearest station is 12 km away. The railway stations in Kasaragod and Kanhangad are close by. Around 1930s, Maharaja Bir Bikram Kishore Manikya Debbarma Bahadur built this fort in the middle of Rudrasagar Lake. Built on one of the largest water bodies in India, the palace boasts Hindu and Mughal architecture with intricate craftsmanship. It is believed that the king was fascinated by the architectural marvels that both the forms offered. Initially, the palace was named Twijilikma.

How to reach: Take a bus from Agartala to Melaghar, or a train from Udaipur to Melaghar. Once there, a local taxi can take you to one side of the palace, where you can take a serene boat ride to reach the palace.