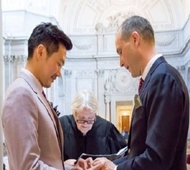 Smith previously served in the Office of Japanese Affairs at the Department of State and as the team leader at the United States Provincial Reconstruction Team in Muthanna Province, Iraq.

He was also a diplomat serving in the US embassies in Yaoundé, Cameroon, Copenhagen, Denmark, Phnom Penh, Cambodia, Bangkok, Thailand, Kabul, Afghanistan and Beijing, China.