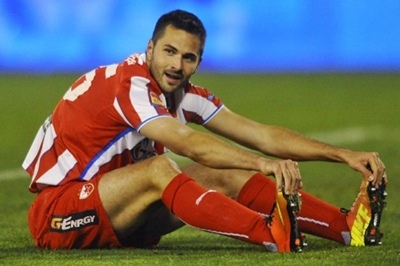 Beijing: Serbian Goran Gogic, a player with China’s second division club Qingdao Hainiu FC, died of cardiac arrest after a training session. He was 29.  On Friday, Gogic was rushed to a hospital after he collapsed on the club bus after a training session. He was declared dead later at the hospital, reported Xinhua news agency.  The hospital hasn’t identified the exact cause of death, according to an official with Hainiu club.  “The club is in deep grief to announce the death of Gogic. He died of a sudden cardiac arrest,” the club posted on microblogging site Weibo on Saturday.  Gogic, born on April 24, 1986, played as a defensive midfielder. He spent most of his career in Serbia and moved to Red Star Belgrade in summer of 2013. He joined Hainiu early this year.  English club Bolton Wanderers player Fabrice Muamba collapsed on the pitch during a game in March 2012 and Italian club Livorno’s player Piermario Morosini suffered a fatal heart attack in April 2012, forcing FIFA’s Medical Conference to decide on the use of defibrillator at every game and making pre-game medicals mandatory.