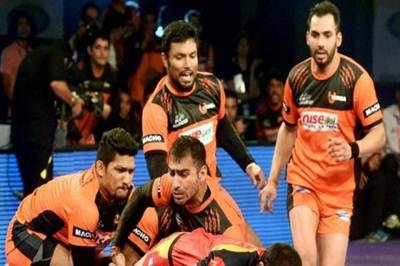 Mumbai: Defending champions U Mumba are confident and totally focused on retaining their Pro Kabaddi League title with a nearly unchanged outfit when the third edition of the franchise-based tournament commences on January 30.

“This year, we are completely focused on defending the title. We have been a very close knit unit and that bond clearly reflects in the way we play. We have faith in our players which is why we decided not to change the team. We’ve only added Rakesh (Kumar) which, we believe, will make the team stronger,” said team coach E Baskaran today. “In terms of training, we have focused a lot on conventional and unconventional training methods because, ultimately, it is more important to maintain your position at the top than getting to the top,” said the franchise team’s coach at the launch of the official U Mumba Adidas jersey here.

Key player Rishank Devadiga remarked that U Mumba was the most consistent team in the first two editions of the tournament. “U Mumba has been the most consistent team over the past two seasons of Star Sports Pro Kabaddi League and we want to continue that trend. This year, we have approached the season with equal focus on training and recovery,” said Devadiga.

“Unlike other teams, we have not made many changes to the winning combination and have added the highly talented Rakesh Kumar, who has a large vault of experie ce to draw upon, to ensure we lift the trophy this season as well,” said an optimistic sounding Devadiga.

Teammate Shabeer Bapu said he has gone the extra mile to be fit for the season in which U Mumba take on Telugu Titans in the opening game at Vishakapatnam. “Since last year, I have worked a lot on my fitness to ensure that I contribute towards every match and ultimately help us defend the title. The team, coaches and support staff are working tirelessly to ensure a repeat of Season 2,” said Bapu.

The final of the 36-day event is scheduled to be held in Delhi on March 5.