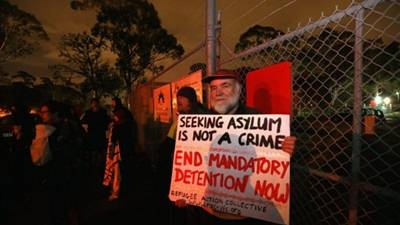 Sydney: Australia was today set to allow an  asylum-seeker’s baby to remain in the country instead of being deported back to a remote Pacific detention camp, in what refugee advocates claimed as a victory after a public outcry.

Under Canberra’s harsh immigration policy, asylum-seekers attempting to arrive in Australia by boat are sent to camps in Papua New Guinea and Nauru, where they are held indefinitely while their refugees applications are processed.

The one-year-old baby, named Asha and the child of Nepalese asylum-seekers, was held on Nauru with her parents before being brought to the Australian mainland for medical treatment last month. Asha was due to be sent back to the camp after a court ruling in favour of the government’s offshore immigration detention policy, but the hospital caring for her refused to release the infant until a “suitable home environment is identified”.

“We are proposing that baby Asha will come from Lady Cilento and will go into community detention as have, as I say, 83 others who are living in the community who are in Australia for medical assistance,” Dutton told reporters in Brisbane.

Community detention is when asylum seekers waiting for their refugee applications to be processed live within the community and are usually allowed to move around freely. However they can still be moved or removed by the immigration department at any time. Dutton said the government’s decision was pre-planned and not a result of pressure from medical professionals and the public.

The hospital confirmed the decision and said the move would take place “within the next 24 hours”. Refugee advocates welcomed Dutton’s announcement, hailing it as a victory for their campaign against the deportations to Nauru of Asha and 266 other asylum-seekers also in Australia for medical care.

“A week ago we had to file an urgent case in the highest court in the country to stop the government from secretively deporting this baby to Nauru,” the Human Rights Law Centre’s Daniel Webb said in a statement.

“Now the family is being released into the community. It’s a massive turn-around.” Annastacia Palaszczuk, Labor Premier of Queensland, the state in which the hospital is located, said Dutton’s decision was “too slow and lacked empathy” as she renewed her offer to house asylum-seekers facing removal in the community.