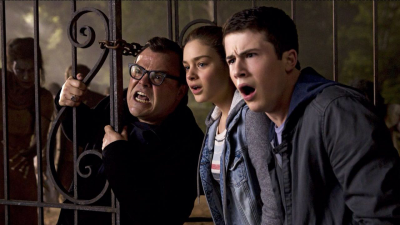 Breathes there a woman with soul so dead, who never to herself had said, ‘Ah me, if only Jane Austen’s fictional Mr Darcy were flesh and blood and sinew.” How author R L Stine and filmmaker Rob Letterman understand the human heart! Only, Letterman has made a high school teen named Zach Cooper (Dylan Minnette), the abode of womanly longings in this Halloween-themed 3D adaptation of Stine’s bestselling horror series for kids.

Zach and widowed educator-mom Gail (Amy Ryan) relocate from New York City to a small town  where their new neighbour is the aforementioned real-life author Stine who has a tiny cameo in this  film whose lead (grownup) character is the author himself. As played by the singer-actor Jack Black, the reel Stine is intensely sour and dour, a far cry from the cheery real life person.

When they first meet, the overprotective Stine warns Zach to stay away from his lovely, home-schooled daughter Hannah (Odeya Rush). One night Zach witnesses a loud argument between Stine and Hannah. Concerned, Zach and his buddy Champ (Ryan Lee), sneak into the Stine household to help Hannah and accidentally release a (CGI) monster from a hardbound manuscript.

Shortly after, other fictional ghouls come to life, including the Abominable Snowman, a ventriloquist’s psychopathic dummy named Slappy, a Mummy, a werewolf, swamp thing, man-eating plants, gnomes, giant bugs, zombies and aliens. Some of the monsters are scary, some not. And while the flick isn’t a scream-fest, it does have a few goosebumps in the story which underlines themes of friendship and parenting.

The plot itself revolves around the conceit that the 25 plus monsters Stine created over 23 years (almost one for every year) are real although safely locked inside the books he wrote. This results in Stine and Hannah living a reclusive, friendless lives. Zach is luckier: he has a good  friend in Champ. And with the impetuosity of youth, imagines love at first sight with Hannah, who it must be said, leads him on. When mayhem erupts with Slappy (also voiced by Black) spearheading havoc and destruction, adversity brings out the best in Zach and Champ. Not so with the reel Stine whose backstory reveals he was a traumatised boy and since, has been consumed by the green-eyed monster. And worse.