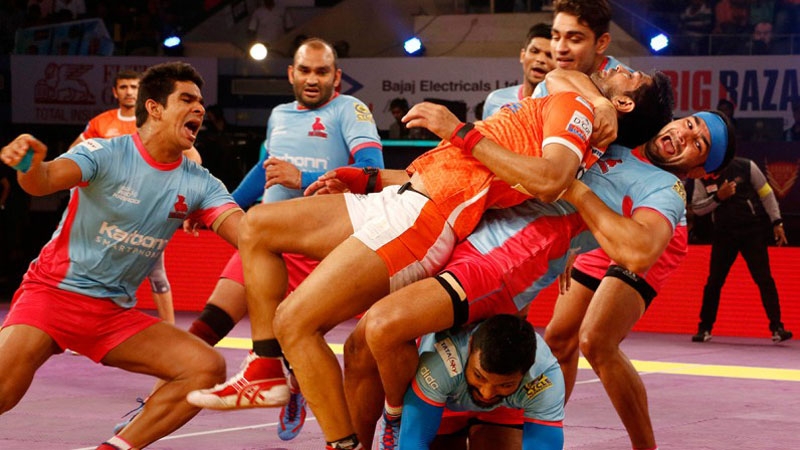 Having lost to home team Bengal Warriors yesterday, the inaugural edition champions looked sharp in their attacks, and were equally smart in tackling to seal their sixth win of the season.

‘Best Defender’ Amit Hooda and ‘Man-of-the Mat’ Ran Singh formed the core of their defence, while Jasvir Singh led from the front with his fruitful raids as the Jaipur franchise inflicted two allouts on the Pune outfit.

It was too big a blow for the Pune franchise who trailed 9-17 at the interval as they regrouped to log 18 points in the final 20 minutes but that proved to be insufficient.

The Jaipur franchise broke away from being five-all in the first quarter when captain Singh effected an allout raid to hand them a sizeable 12-7 lead.

Deepak Hooda and Ajay Thakur with nine points each excelled for Puneri Paltan but those were not enough as they were let down by their defenders to suffer their fourth defeat.

Jasvir Singh walked away with the Best Moment award for Pink Panthers.

Patna Pirates got the better of home outfit Bengal Warriors 33-27 in a thrilling battle later in the day to go four points clear of second placed Jaipur Pink Panthers.

Their eighth win from 10 outings meant the consistent Patna franchise are virtually through to their fourth semifinals from as many editions.

For the bottom placed Bengal Warriors, who had their best — semifinal — finish last season, the campaign was all but over.

Trailing by two points at the interval, Patna rode on Fazel Atrachali’s super tackle to snatch a 21-18 lead at half-hour mark.

Their best raider Atrachali had a second super tackle to finish with seven points, while Pradeep Narwal and Surjeet Singh combined with 15 points to seal their victory.

Bengal Warriors made a tactical move by bringing in Monu Goyat who impressed with nine points but it was their over dependency on Korean star raider Jang Kun Lee that proved costly.