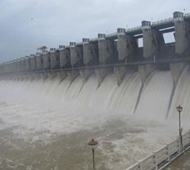 London: Reservoir islands created by large hydropower dams – hailed as conservation sanctuaries to protect species – undergo sustained loss of animal and plant life every year, a new study has found. New research led by the University of Stirling in the UK found a global pattern of sustained species extinctions on islands within hydroelectric reservoirs.

They discovered that reservoir islands across the world do not maintain the same levels of animal and plant life found prior to flooding.

Despite being hailed as conservation sanctuaries that protect species from hunting and deforestation, the islands undergo sustained loss of species year on year after dam construction, a pattern otherwise known as ‘extinction debt’, researchers said.

The findings represent a significant environmental impact that is currently missing from assessment procedures for proposed new dams. “We found a devastating reduction in species over time in the majority of reservoir islands we studied,” said Isabel Jones, PhD researcher at the University of Stirling.

“On average, islands have 35 per cent fewer species than nearby mainland sites, however one South American bird community suffered as much as 87 per cent loss of species on reservoir islands,” said Jones.

“We know flooding reservoirs causes immediate loss of habitat and species, but we now find there is also a significant future biological cost as the ‘extinction debt’ is
paid,” she said. “No matter where the dam is located, the island size, or which species are present, there is sustained loss of species, with many in existing dams still potentially facing extinction,” she added.

Loss of species was studied over a period of less than one year to over 90 years from when islands were created by reservoir filling.

With more than 50,000 large dams operating globally, including in highly biodiverse regions such as the Amazon Basin, and many future dams planned to help meet rising energy demands, researchers believe more needs to be done to account for the long-term loss of species on reservoir islands.

“Current practices to minimise the detrimental impacts of major hydroelectric dams include tropical forest set-asides, but this is a mirage if the remaining terrestrial biota becomes stranded in small islands – this needs to be taken into account in new infrastructure developments,” said Carlos Peres, professor at the University of East Anglia in the UK.

“Strong environmental licensing should be put in place to assess species losses versus the amount of hydropower output to even-up the biodiversity balance sheet,” said Peres.