Holders U Mumba to open title defence against Titans 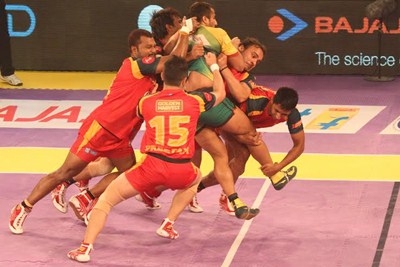 New Delhi: U Mumba will open the defence of their title with a clash against Telugu Titans as the third season of the Star Sports Pro Kabaddi begins in Visakhapatnam on January 30. Apart from the Indian stars, 26 foreign players will also showcase their skills this season, in which eight teams will fight for the title.

Bollywood star Abhishek Bachchan, who owns Jaipur Pink Panthers, said his team was ready for the challenge. “We are all shaped up. It is wonderful to have Navneet (Gautam) in the team and other players,” he said at the launch of League.

The junior Bachchan’s team will be led by Navneet Gautam, a two-time gold medallist in the Asian Games and a veteran in the sport. Gautam said he was happy to see that the sport is getting popular with time. “I saw a British family playing Kabaddi at Taj hotel in Mumbai. The foreigners are coming to see our game.”

Recalling the days of his childhood when he used to play Kabbadi with his father and bollywood legend Amitabh Bachchan, Abhishek said that the Indian sport has been his favourite since then.

“I saw Paa (Amitabh Bachchan) playing Kabbadi in one of his films ‘Ganga Ki Saugand’ and asked him about the it, and it was then he took me out and we began playing Kabbadi,” he said.

The junior Bachchan said that his father was happy about his owning a Kabbadi team and supported the idea when he brought it to his notice. “Seeing the kind of sportsmanship among the Kabaddi players, I decided to be part of it. It is my honour to spend time with athletes. These guys have immense respect for each other. They share joy and happiness,” he said.

Abhiskeh, who also owns a football team, said that he finds it exciting to support games that need development in India. “I earn in films, and spend it over my teams. This way, it is rewarding for me,” he said.

Senior vice-president, STAR India, Anupam Goswami said that promoting Kabbadi was part of the organisation’s vision. “We have done fairly with the Kabaddi. It is our ambition to foster multi-sport culture in India,” he said.

He said that viewership of the Kabaddi has seen a significant increase and is the second most viewed sport after cricket in the country.

International Kabaddi Federation President Janardan Singh Gehlot said Kabaddi has started getting a lot of attention. “Kabaddi had no recognition. Now we have come to a stage that even a Dhaba wala watches it on television. We have 31 countries where Kabbadi is played and we want to popularise it throughout the world so that it is also included in the Olympics.”

The third will feature 60 games to be played on specially developed mats, in state-of-the-art indoor stadiums across 34 days. The league will also come to Delhi between February 24 to February 27 and four matches will be played at the Thyagaraj Indoor Stadium.

It will finally return to national capital for playoffs, semi-finals and the finals, scheduled for March 4 and 5.