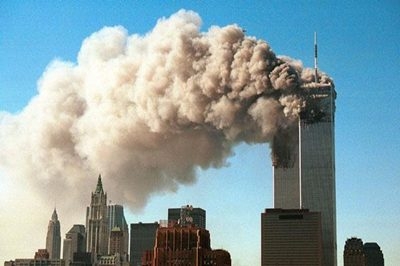 NEW YORK - SEPTEMBER 11, 2001: (SEPTEMBER 11 RETROSPECTIVE) Smoke pours from the twin towers of the World Trade Center after they were hit by two hijacked airliners in a terrorist attack September 11, 2001 in New York City. (Photo by Robert Giroux/Getty Images) |

The Hague: Nations must share intelligence to stop extremist groups slipping across borders and using the Internet to plan attacks, ministers insisted today as they sought concrete commitments to halt intel failures. In the wake of the November 13 Paris attacks allegedly masterminded by a Belgian-born extremist, Belgian Foreign Minister Didier Reynders admitted more must be done.

“Intelligence services must get used to not only collecting information, but to sharing it,” he told AFP on the sidelines of a conference gathering more than 50 countries to
discuss how to thwart terror groups. “We are doing it more and more among European services, but there is still work to be done,” he acknowledged at the conference hosted by The Netherlands.

Held as part of the Global Counter Terrorism Forum (GCTF) and the Global Coalition to Counter ISIL, the talks were taking place nearly two months after the Paris attacks which killed 130 people. And they come as The Netherlands begins its six-month
rotating presidency of the European Union.

“What we face today is terrorism 2.0. Like a virus, it adapts to survive and becomes more resilient,” Dutch Foreign Minister Bert Koenders told the opening of the talks.

“We are not dealing with the stereotypical terrorist we see in the movies. The type that can be defeated by a one-man army like Bruce Wills in ‘Die Hard’.” The talks come after a year of deadly attacks staged by the so-called Islamic State jihadist group, which has captured a swathe of territory in Iraq and Syria attracting a thousands
of foreign fighters to its ranks.

Speaking to AFP, France’s European Affairs Minister Harlem Desir said coordination was crucial. “Today the whole international community needs to work together to fight against terrorism,” he said. “There also has to be a huge coordination in intelligence
matters, judicial and police cooperation.” Countries are often wary of sharing hard-won intelligence with other nations with which they may not have such good relations.

But Koenders insisted the key was “mutual trust” adding the conference aimed to identify precise ways nations and organisations like Europol and the Interpol could help each other. “Do we trust each other enough to share information, and are we willing to work together?” he asked.”This means sharing information and data” as well as threat analyses, he said.