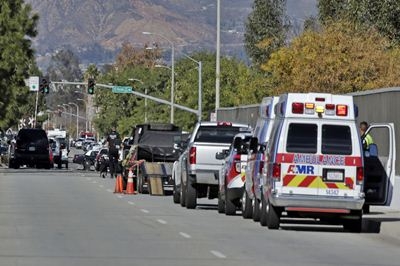 Law enforcement members line up near the the site of a mass shooting on Wednesday, Dec. 2, 2015 in San Bernardino, Calif. One or more gunmen opened fire Wednesday at a Southern California social services center, shooting several people as others locked themselves in their offices, desperately waiting to be rescued by police, witnesses and authorities said.(AP Photo/Chris Carlson) |

Washington: Two weeks before he and his Pakistani wife went on to kill 14 people in California, a USD 28,500 deposit was made to the account of slain gunman Syed Farook, a media report has said. 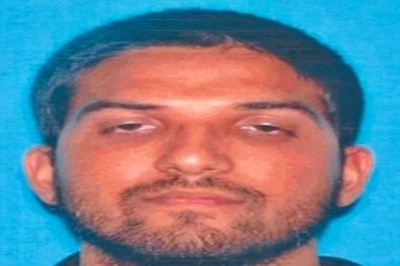 Farook received this amount from WebBank.com, which on its website describes itself as “a leading provider of national consumer and commercial private-label and bank card financing programmes on a nationwide basis,” investigations revealed.

“Investigators are exploring whether the transaction was a loan taken out by Farook,” Fox News said in an exclusive report on the deadly shooting at San Bernardino.

Farook, whose parents migrated to the US from Pakistan, earned USD 53,000 a year as an environmental health inspector.

He and his Pakistani immigrant wife, Tashfeen Malik, went on a shooting rampage last Wednesday that President Barack Obama described as an act of terrorism.

Yesterday, FBI officials told reporters that the terrorist couple were radicalised for some time.

“Both subjects were radicalised and have been for quite some time,” said David Bowdich, FBI assistant director in charge of the Los Angeles Field Office.

Without going into much detail, he said the terrorist couple were frequent visitors to the Los Angeles shooting range for target practice.

Farook visited the Riverside Magnum Range and practiced shooting an AR-15 there, according to a firearms instructor at the facility.

“He came in like a normal guy,” firearms instructor John Galletta told the Los Angeles Times.

According to Fox News, on or around November 20, Farook converted USD 10,000 to cash, and withdrew the money at a Union Bank branch in San Bernardino.

“Afterwards, in the days before the shooting, there were at least three transfers of USD 5,000 that appear to be to Farook’s mother,” the media outlet said.

Farook, 28, and Tashfeen, 27, who had a six-month-old baby, died in a shootout with police hours after the murders.

According to the Los Angeles Times, federal investigators are trying to determine if Farook was influenced by a terrorism figure known as “Miski,” who earlier this year sought to direct the attempted attack on a cartoon contest in Texas.