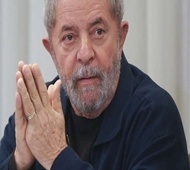 Sao Paulo: Brazil’s ex-president Luiz Inacio Lula da Silva vowed to battle his opponents in the streets in a defiant speech late Friday, hours after being briefly detained as part of a probe into a massive corruption scheme. Wearing a red shirt with his leftist Worker’s Party yellow star on his chest, Lula gave an emotional speech to supporters where the charisma and feistiness that characterised his 2003-2010 presidency were on full display.

“If they want to defeat me, they will have to face me in the streets of this country!” he told hundreds of supporters at a Sao Paulo rally. Lula, 70, even shed tears when he talked about how he lifted millions of Brazilians out of poverty during his two
terms in office.

Earlier in the day agents took Lula to a police station for questioning, raided his Sao Paulo home, the offices of the Lula Institute, and homes of family members and associates. Prosecutors said Lula was targeted as part of the Operation Car Wash investigation into a sprawling embezzlement and bribery conspiracy centered on the state oil giant Petrobras.

The corruption scandal, which has already seen a Who’s Who of Brazilian politicians  and businessmen face charges, is believed to be the biggest ever in Brazil Lula was not arrested, but held for questioning over  alleged “favors” received from corrupt construction companies  implicated in a kickback scheme, prosecutors said.

In a press conference shortly after being released, Lula said the decision to take him forcibly into custody for questioning amounted to “judicial authoritarianism.” “If they wanted to hear from me, they only had to call and I would have gone, because I owe nothing to anyone and fear nothing,” he said. “They preferred to show power, arrogance, to make a show.”

He was supported by President Dilma Rousseff, a close ally in the ruling Workers’ Party, who said she was “in complete disagreement” with the decision to detain Lula.

The drama sent shockwaves through Brazil’s already turbulent political landscape. As officials, backed by camouflaged officers with automatic weapons, went through Lula’s house, supporters and opponents demonstrated in the street, shouting and scuffling.
Later, as Lula gave his press conference, supporters gathered outside with placards including one that read: “No to the coup.”

Lula remains one of Brazil’s most influential and powerful figures, and his fate is closely linked to that of his successor Rousseff, and the future of the Workers’ Party. Rousseff, deeply unpopular over her handling of a brutal recession, is already fighting for her political life against the threat of impeachment and a court case that could potentially see her 2014 reelection declared illegitimate.