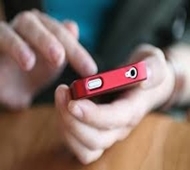 Washington: Researchers have developed a new Batman movie-inspired software which could let you make a call by squeezing your smartphone with the palm.

The call is made when the user squeezes the smartphone in a certain pattern with the palm. A different pattern might turn the music on or flip a page on the screen, researchers said. The software ForcePhone, developed by scientists from University of Michigan in the US, could give any smartphone the capacity to sense force or pressure on its screen or body.

It could also enable users to push a bit harder on a screen button to unlock a menu of additional options, similar to right-clicking with a mouse, researchers said.

No commercially available device has a pressure-sensitive body, they said.

“You do not need a special screen or built-in sensors to do this. Now this functionality can be realised on any phone,” said Kang Shin from the Michigan University. “We have augmented the user interface without requiring any special built-in sensors. ForcePhone increases the vocabulary between the phone and the user,” said Shin.

Shin created the system with Yu-Chih Tung, also from the Michigan University. “I think we are offering a natural interface, like how you turn a knob. It is the next step forward from a basic touch interface and it can complement other gestured communication channels and voice,” said Tung.

ForcePhone works by borrowing two of a phone’s fundamental attributes — its microphone and speaker, researchers said. The software sets the speaker to emit an inaudible tone at a frequency higher than 18 kilohertz (kHz), which is outside the range of human hearing. But the phone’s mic can still pick up the vibration caused by the sound, they said.

When a user presses on the screen or squeezes the phone’s body, that force changes the tone. The phone’s mic can detect that, and the software translates any tone tweaks into commands, researchers said.

The idea of harnessing the phone’s microphone and speaker for other purposes is an approach Tung initially picked up from the Batman movie, “The Dark Knight.” In the film, Batman turns all the smartphones in Gotham City into a sonar system as high-frequency audio signals bounce off the city’s infrastructure. He uses them to track the Joker, researchers said.