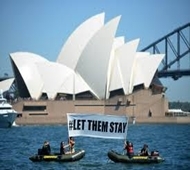 Sydney: Australia cannot be “misty-eyed” about boatpeople, the country’s prime minister said today, the day after his immigration policy was thrown into disarray when Papua New Guinea ordered an offshore processing camp to close.

Malcolm Turnbull, who likely faces an election in coming weeks, said allowing even genuine refugees who arrived by boat to settle in Australia would encourage more people to make the risky journey.”By stopping the people-smuggling we have stopped people drowning at sea,” he told reporters.

“We cannot be misty-eyed about this. We have to be very clear and determined in our national purpose.”

Canberra has a long-standing policy of sending boatpeople to processing centres in Papua New Guinea’s Manus island and the Pacific nation of Nauru. Applicants who are deemed legitimate refugees are offered resettlement in PNG or Cambodia, but not admitted to Australia.

The policy was dealt a blow Wednesday when the PNG government ordered the Manus island facility to close after the supreme court ruled it was unconstitutional and illegal.

Canberra officials are set to hold talks with their Port Moresby counterparts next week on what to do with the 850 or so men held there. But Turnbull was unequivocal.

“They will not come to Australia. That is absolutely clear and the PNG government knows that, understands that very well,” he told reporters. “To do that would send a signal to the people-smugglers to get back into business, and that is utterly unacceptable.”

Boat arrivals have been halted since the government put in place its tough policies, compared to at least 1,200 people dying trying to reach Australia by sea between 2008 and 2013.

Australian media have reported the government is trying to negotiate deals with Malaysia, Indonesia and the Philippines.

It also has a detention camp on the tiny Pacific island of Nauru, where an asylum-seeker on Wednesday set himself on fire during a visit by UN officials. No timeframe for closing the Manus island facility has been provided. (AFP)