9 killed as bus plunges into canal in Bangladesh 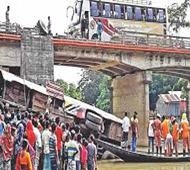 Dhaka: At least nine persons were killed and 30 others injured in Bangladesh when a bus they were travelling in fell into a canal on Dhaka-Barisal Highway, police said. The incident occured yesterday afternoon in the Samaddar area of Madaripur, when the front-left tyre of the bus, carrying over 60 people, blew out as it reached Samaddar Bridge, causing the bus to crash through the bridge’s railing and plunged into the canal.

While five passengers died on the spot, fire service and police teams pulled out the bus in which three more bodies were found. Another victim died on the way to hospital, Madaripur sadar police Officer-in-Charge Ziaul Morshed was quoted as saying by the Dhaka Tribune today.

Four of the deceased have been so far identified and include a 40-year-old woman, two men aged 60 and 50 besides the bus helper Abdur Rashid. Other victims, including the driver, have not been identified yet, the report said. The condition of many of the injured was critical, according to doctors.