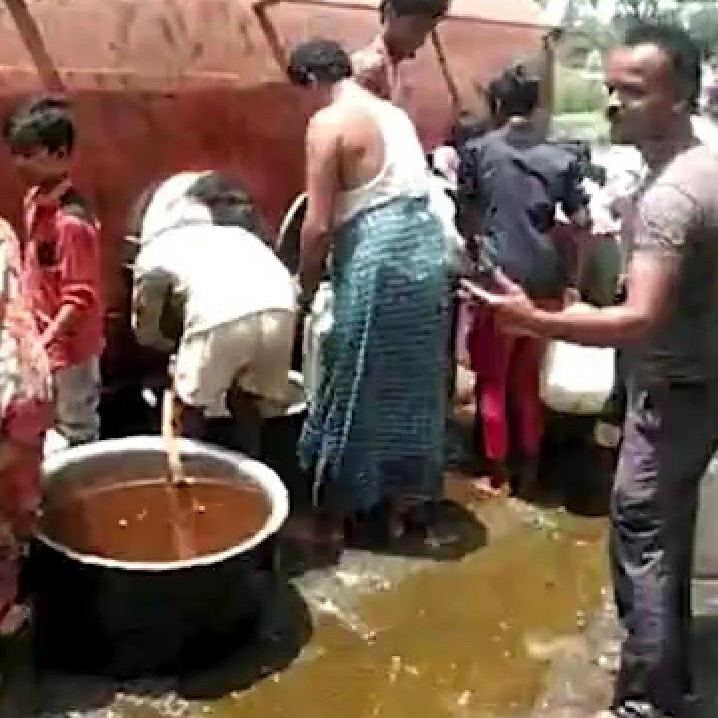 Ujjain: A tanker carrying palm oil from Gujarat's Kandla Port to a Kurkure factory in Bandka overturned near Jaithal Pulia on Thursday morning.

As the oil overflowed from the tanker, people competed to loot it. They carried oil in buckets, cans and even in bottles. The accident and subsequent rush to benefit from it led to a long jam on Agar Road.

Police said that the tanker was on the way to a Kurkure factory in Jaithal after filling the oil from Kandla Port in Gujarat. The driver lost control over the vehicle as suddenly a car came in front of it. The driver swerved the vehicle to save the car but due to high speed, it went off track and hit a culvert and overturned.

The tanker lid opened after the accident and oil started flowing on the road. People found opportunity in disaster and rushed to loot the oil.

Cops did reach the spot but could do little to disperse people who were jostling to get as much oil for themselves as they could, said an onlooker.

Due to the accident, oil spilled on the road, subsequently this portion of road posed challenge to the drivers of the vehicles which passed the spot. Oily road made the ensuing jam even worse as drivers parked their vehicles at random on Agar Road. Tyres of vehicles started losing grip over the tarmac, so fire brigade was called in and only after the road was washed did the jam started clearing gradually.

The station in-charge said that there was a jam due to the overturning of the tanker.

People had taken away the oil before the police arrived, he claimed. We called in fire brigade to clear the jam, he added.